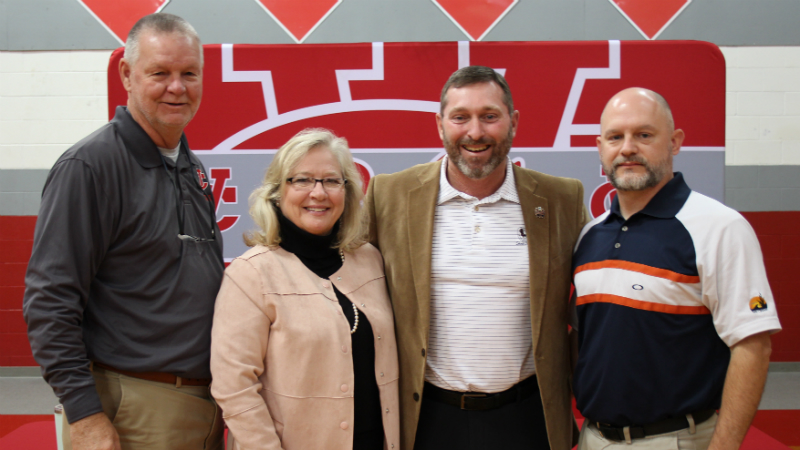 HARPERSVILLE – As the Auburn baseball team fought its way to the College World Series this year, the Tigers had to face, and overcome, their fears.

“Don’t let fear slow you down,” Thompson said. “Do not let fear interrupt something that you want to do that’s great.”

A native of Mississippi, Thompson earned a degree from Birmingham-Southern College and began his coaching career as a pitching coach at Huntingdon College. He has been head coach at Jefferson Davis Community College and is entering his fifth year at Auburn after leading the Tigers to the 2019 College World Series.

Edwards organizes the school’s weekly chapel services, with speakers ranging from local youth ministers to the owner of the Godspeed training facility in Hoover.

“I thought the kids needed something different, new and exciting,” Edwards said.

Fears change along with one’s situation in life, Thompson said.

“When I was a junior college coach at 25, my fear was will my car get me back to work again,” Thompson said.

At another time in his career, Thompson was preparing his team for the College World Series when former AU football coach Pat Dye visited with the players.

“Your courage has got to be greater than your fear,” Thompson recalled Dye saying.

Once the team reached the College World Series location of Omaha, Nebraska, it was visited by Jim Voss, an Auburn graduate who as an astronaut set the record for longest spacewalk, at almost nine hours.

Thompson said he asked Voss how he managed.

“He said, ‘Butch, I’ve been planning for that spacewalk for 20 years,’” Thompson said. “His preparation was greater than his fear.”

Preparation is one key to success in life, Thompson said, and another is surrounding oneself with the right people.

“I want you to find a group of friends that you trust,” he told the CVA students and pointed to the story of Roger Bannister, who was the first runner to run a mile in under 4 minutes and did so with the help of training partners who kept him on pace. “I’m telling you it’s everything. “It’s one of the biggest business decisions you’ll ever make in your life.”