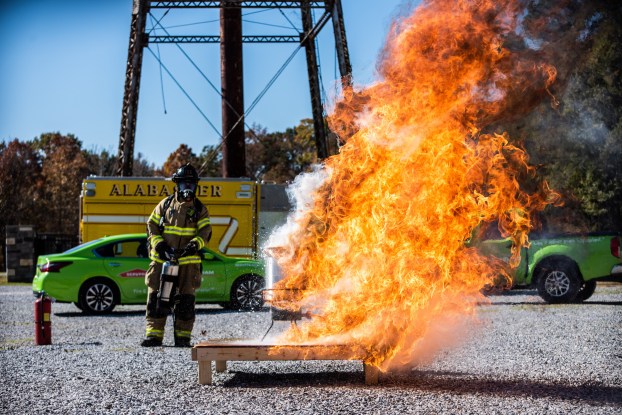 Alabaster firefighters take part in a demonstration to show what happens when a frying a turkey goes wrong. (Reporter photo/Keith McCoy)

Food safety measures to keep in mind during the holidays

ALABASTER – As Thanksgiving approaches and the subsequent holiday season ensues, first responders and healthcare professionals are reminding residents to take safety precautions when it comes to cooking and storing holiday meals.

On Tuesday, Nov. 19, the Alabaster Fire Department partnered with ServPro, a fire and flood damage restoration company, to educate the public about how dangerous it can be to improperly fry a turkey. ServPro and Alabaster firefighters demonstrated how failing to follow instructions could lead to starting a fire.

-Improperly thawing the turkey.
-Letting the temperature of the cooking oil get too hot.
-Using too much cooking oil.
-Cooking the turkey in a basement, under a carport or near a structure.

During the demonstration, the turkey was not properly thawed, the cooking oil was too hot and there was too much oil in the pot. As soon as the turkey was placed into the pot, flames erupted. Love stressed that it’s important to follow all instructions for frying a turkey to avoid starting a fire.

Miriam Pittman, a registered dietician at Shelby Baptist Medical Center, said unthawing a turkey in the refrigerator is the best method. To do this, the turkey should be purchased at least four or five days in advance of it being cooked. For every five pounds of turkey, it should sit in the refrigerator for 24 hours. That means that it would take a 20-pound turkey about four days to completely unthaw. When unthawing any kind of meat in the refrigerator, be sure to place it on the lowest shelf to reduce the risk of any liquids from the meat leaking onto other foods.

Other ways to safely thaw a turkey include microwaving it or submerging it in cold water and changing the water every 30 minutes to ensure it stays cold. It’s also important to drain any liquids from the turkey before frying it.

The ideal temperature for deep frying a turkey is usually 350-375 degrees Fahrenheit. Keep in mind, there needs to be enough cooking oil in the pot to cover the turkey, but not so much that it spills over.

“You should never fry a turkey in or near a structure,” Love said. “If you’re in the basement or under a carport and a fire does start, now your house it at risk of burning down. You should be as far away from a structure as possible and on a solid surface.”

In the event of a fire, the first thing to do is call 9-1-1 and then get away from the danger. Love said a fire extinguisher can be used, but under no circumstances should water be used.

“Don’t grab your garden hose and spray it or attempt to move the pot because that always results in spilling the oil and possibly burning yourself,” Love said.

Jason Kilgro, sales and marketing representative with ServPro, said November to February is fire season for the company.

“We are here to clean up if anything happens, but we would prefer for everyone to have a safe holiday season,” Kilgro said.

Fortunately, Love said the number of turkey frying fire calls received has decreased in recent years. He credits this decrease to the efforts made by the AFD and ServPro to educate the public.

Aside from knowing how to properly cook foods, Pittman said it’s also important to keep food storage safety in mind. It is suggested that food not be left at room temperature for more than two hours. After two hours, food should be refrigerated in shallow dishes so it can cool down quickly.

Leaving food out for more than two hours at a time can result in contracting salmonella and E. coli. Pittman said these bacteria can live on the surfaces of food and multiply quickly.

“If you already have a weakened immune system, you are even more susceptible,” Pittman said.

Food can be kept in the refrigerator for three to four days, but after that Pittman suggests freezing it.

Here are a few other food safety tips to keep in mind over the holidays:

-Use hot soapy water and paper towels to clean countertops instead of sponges/dish towels or disinfectants. Sponges/dish towels can hold bacteria and disinfectants have to sit on countertops for 10 minutes to kill all germs. Pittman said most people spray on the disinfectant and wipe it off immediately instead of letting it sit.
-Don’t rinse meat before cooking it. This spreads bacteria all over sinks and countertops. Any bacteria will be killed when the meat is cooked.
-Don’t eat raw dough/batter that has eggs in it.
-Everyone should wash their hands often.
-If making eggnog, use pasteurized eggs.

By SCOTT MIMS / Staff Writer The town of Wilsonville hopes to brighten the holidays with a little Christmas spirit... read more