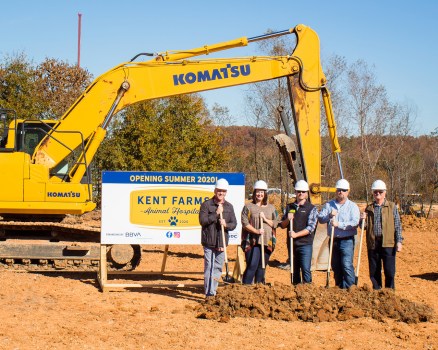 Dr. Miranda Trammell and Dr. Brandon McKim with their design and construction teams. 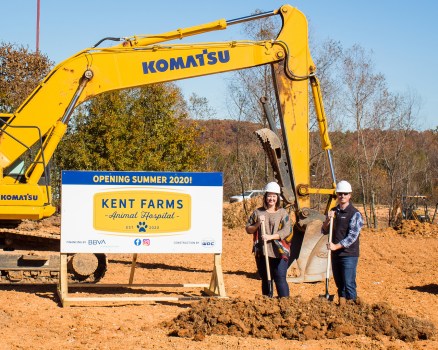 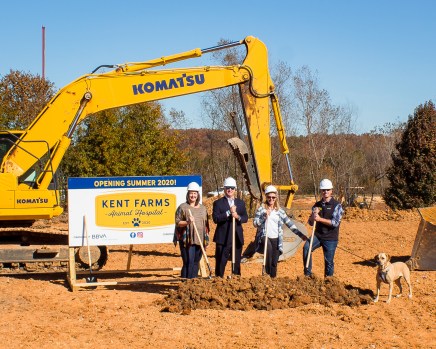 ALABASTER – By the summer of 2020, area residents will have access to a newly built full- service veterinary hospital and kennel called Kent Farms Animal Hospital.

Veterinarians Brandon McKim and Miranda Trammell held a groundbreaking ceremony on Wednesday, Nov. 20, at the site of the project, which is in close proximity to the historic site of the former Kent Dairy Farms on Kent Dairy Road.

The 13,000-square-foot animal hospital and clinic will include boarding, grooming and daycare services. The facility will include indoor climate controlled and outdoor play areas.

The facility will have the capacity to accommodate more than 70 dogs and 20 cats, with private boarding suites available. McKim and Trammell said they’ve thought about every detail, all the way down to separate cat and dog waiting rooms and a courtyard waiting area.

The animal hospital is expected to be completed by August 2020. Wayne Davis Construction was hired to build the facility and Coker Architectural Firm created the design.

Kent Farms Animal Hospital will be the second veterinary hospital owned by McKim and Trammell. They already co-own Mercy Animal Hospital in Gardendale where they employ about 38 people. McKim said the Alabaster location will start off with fewer employees and gradually work its way up to about 40 employees.

“This is a dream come true for us,” McKim said. “This new animal hospital is a chance for us to support the local community and provide a top-notch facility for the area’s pets.”

McKim is a native of Alabaster and still lives in the city with his wife Melissa and their daughters Neeley, Madelyn and Nora. The family has three pets, a dog named Newton and two cats named Krispy and Aubie.

McKim earned a Bachelor of Science from the University of Montevallo in 2000, followed by a Doctorate of Veterinary Medicine from Auburn University in 2005. Since then, he has worked in small animal practices where he has gained a wide array of experience in medicine and surgery with special interest and talent in orthopedic surgery.

Trammell graduated from Auburn University’s College of Veterinary Medicine in 2004. She grew up in Forestdale and has lived in the Gardendale and Hayden areas since then. She and her husband Roger have two children, a son, Walker, and a daughter, Audrey. The family has two dogs, Vivian and Fran, and two cats, Dory and Chubbs.