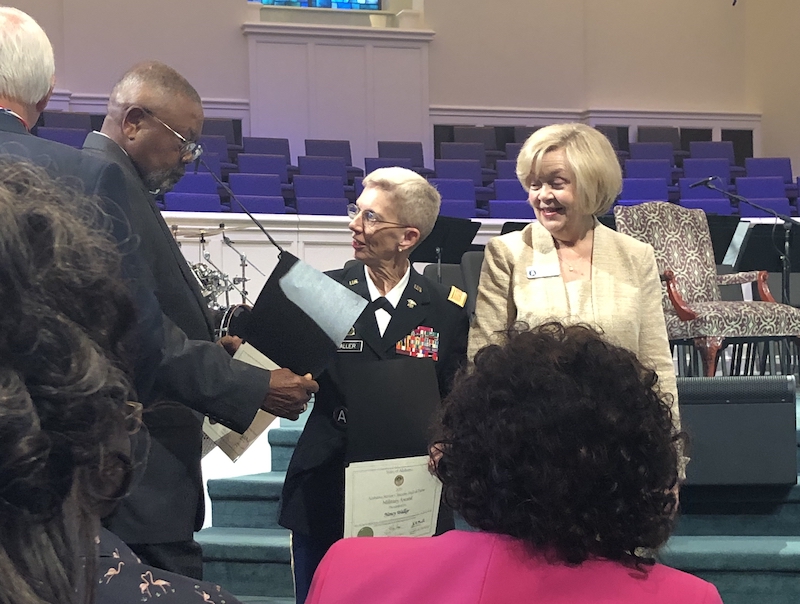 Nancy Waller has been recognized for her military accomplishments and work in veteran services. (Contributed)

On Aug. 18, Nancy Waller was presented the State of Alabama Senior Hall of Fame Military Award for her military accomplishments and dedication to veteran services.

The ceremony was held at First Baptist Church in Montgomery.

The ceremony was followed by a reception in the church fellowship hall.

Waller was nominated by Marvin Copes, coordinator of the Retired and Senior Volunteer Program (RSVP).

Waller was the first female Honor Graduate in the history of AMA.

As a retiree volunteer, she continues taking care of soldiers and airmen in the National Guard and Reserves because of her dedicated countless hours to several National Guard organizations.

In 2014, she began working for Employer Support of the Guard and Reserve and continues in that role, where she has served as district chair and the employer outreach coordinator, presented awards to employers and assisted with military job fairs.

Upon retirement, she was awarded the Legion of Merit award for exceptionally meritorious conduct in the performance of outstanding services and achievements.

She serves on the executive council of the Enlisted National Guard Association of Alabama and is the Second Vice Commander of the Matthew Blount American Legion Post 555. Waller is also a charter member of the Lance Cpl. Thomas Rivers VFW Post 12185.