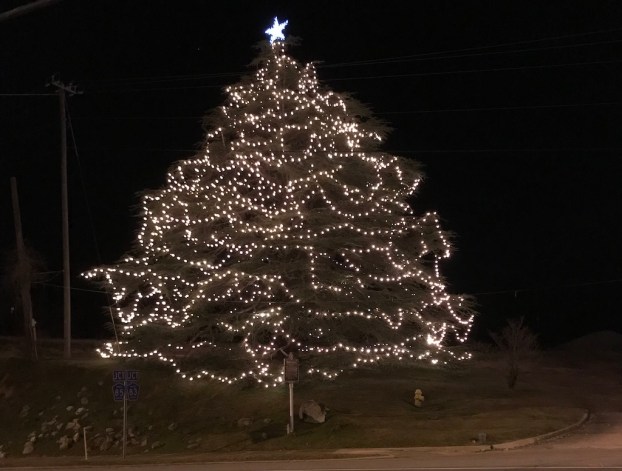 Vincent’s Christmas tree is reportedly the largest in Alabama. (Contributed)

Mark your calendars for Monday, Dec. 2 at 5 p.m. for the Vincent Christmas Parade and Tree Lighting. For those of you making a mental note, that is the Monday following Thanksgiving. If you go over budget on Black Friday don’t despair, Monday’s festivities are free!

According to Vincent Councilmember Bridgette Jordan-Smith, “All churches in the city and a few surrounding the city are providing refreshments.” Reportedly there will be hot dogs, a variety of soups, cider, hot chocolate and of course sweets. Businesses are also planning to participate in this fun, family-oriented evening.

The 5 p.m. start time is significant this year because it is a change from past years. This year, festivities will be prior to the parade! That’s right, you need to get there early and enjoy the community atmosphere before the 6 p.m. parade.

“In past years we had festivities and announcements of float winners after the parade. This year, the program will be before the parade and will include the lighting of the tree,” said Jordan-Smith.

She went on to explain that this is one of two large community events sponsored by the city each year. “We have Vincent in the Park at the end of the summer and the Christmas Parade and Tree Lighting during the holiday season.”

It is believed that moving the festivities to the hour prior to the parade fosters more time for fellowship. “We think it is a big deal that all of our churches have agreed to participate. It demonstrates the strength of our faith in this community,” said Jordan-Smith.

Because there will be refreshments prior to the parade, it is hoped that it will help those with small children to attend. Parents won’t have to hurry to grab dinner and get to the parade; they can just enjoy an evening with the family.

It is reported that the decorated Christmas tree across from City Hall is the largest in the state of Alabama. According to the late Geraldine Waldrop, the tree was planted by Lucille Floyd and Lallouise McGraw in 1935. She used to tell, “Those women were bent on beautifying the town.”

And beautiful it is. The tree serves as a landmark in Vincent and will be lit prior to the parade and stay lit until after Christmas.

The parade will start at the Municipal Park and end at City Hall traveling down Alabama 25.