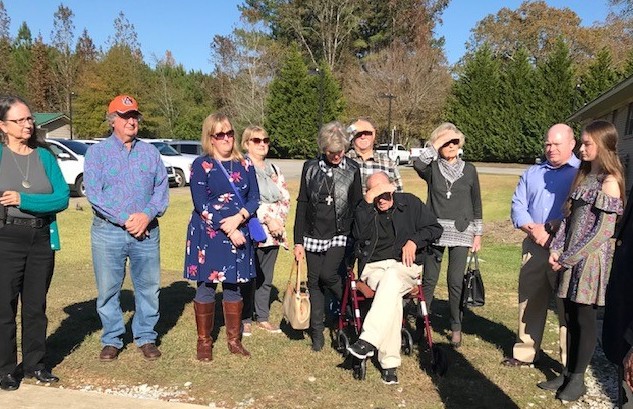 A ceremony was held to dedicated Westover’s storm shelter to the late Jeanne Champion Fisch. (Contributed)

On Sunday, Nov. 10, the city of Westover held a ceremony to dedicate the storm shelter to Jeanne Champion Fisch at the Westover City Hall.

This project began with the efforts of Fisch in 2009 when she spearheaded the project for the community. She worked diligently on this along with the other City Council members before her passing Dec. 28 of last year.

Therefore, the Council decided it was only fitting for the shelter to be named in her honor. Her love for the community and a passion for the people gave her a vision of the shelter for those who needed it. It is a place of refuge for the surrounding area during a tornado or other catastrophic event.

To show how much her efforts are appreciated, the city has placed a plaque in her honor in the shelter that states, “Jeanne Champion Fisch Safe Shelter.”

The dedication ceremony was hosted by Mayor Larry Riggins, the members of the Westover City Council, and a number of family and friends.

Fisch’s family moved to Westover in the 1950s. She went to Samford University after high school and graduated with a master’s degree. She then worked a long career in the banking industry until she retired.

She served four terms on the Westover City Council and worked on the zoning board as well. She was a long-time member of Mt. Tabor United Methodist church. She was married to Don Fisch and had one son, Jonathan Malloy (wife Margaret), and two grandchildren, Trent and Meghan.

Frankie Osborn is a community columnist who writes about the Westover area.