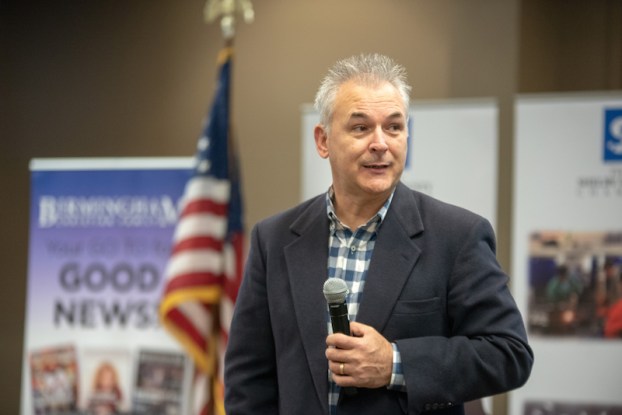 PELHAM – The Shelby County Chamber’s 23rd annual Prayer Breakfast featured a message by Shelby County Commissioner Mike Vest to express thanks for people in your life, demonstrate the ability to never give up and don’t allow someone to say you can’t do something, as he spoke to chamber members the morning of Tuesday, Nov. 26, inside the Pelham Civic Complex and Ice Arena.

The Chamber’s “Prayer Breakfast,” has been held annually since 1996, and offers business-people and community leaders to come together for fellowship, while celebrating and giving thanks for all their many blessings. The program was also a time to reflect on what’s truly important in life and what inspires us to make a difference in the lives of others and our communities.

Vest, who currently represents District 6 on the Shelby County Commission, served as the keynote speaker for the breakfast where he shared stories of his childhood struggles that included an absent father due to alcoholism and an older brother who also got caught up in the grip of addiction with his drug use.

These situations caused his mother to work extremely hard to make ends meet, as Vest talked about his mother’s perseverance and her dedication to her job at the cleaners where she never missed a day of work.

“My mom is a giver and she always has been despite not having a dime in her life,” Vest said. “We had food stamps, free lunches and we had Toys for Tots growing up. My mom worked hard and she sacrificed for us.”

Through it all, Vest relied on his faith and the lessons he learned from his mom to excel the further he went in life.

Another way he was able to excel was through the Big Brothers Big Sisters non-profit organization.

“My mom said, ‘you’re not going to be like your older brother’ and in 1979 my mom got me hooked up with Big Brothers Big Sisters and 40 years ago this year, I got a big brother named Mark and we’ve been best buddies for the last 40 years,” Vest said. “If it wasn’t for Mark, I wouldn’t be here today and I would’ve fallen in my brother’s footsteps. All I needed was a pat on the back, which is what Mark gave me.”

This encouragement led Vest to accept a football scholarship at Samford University and later he became a talented country music singer who opened up for numerous stars in Nashville.

Later at the Prayer Breakfast, Vest shared that as years went on he was able to help both his dad and older brother in terms of getting them on their feet or helping them get clean.

Vest was able to help pay his dads rent at an apartment until eventually his dad made every rent payment for the next seven years until his death.

As for his older brother, Vest said he found him in downtown Birmingham in December 2010 in rough shape but his brother was ready for change, as Vest helped him get to The Foundry.

“For the first time in 35 years of him being addicted, the most beautiful words came out of his mouth that day and he said ‘I’m ready to go,'” Vest said. “So, I took him and he got cleaned up and accepted Christ in his life. He was doing well for three and a half years but he died of a heart attack three years ago but God gave him one last chance, and my brother took it.”

In addition to serving on the Shelby County Commission, Vest also serves as the executive director on the Addiction Prevention Coalition where he serves as a community resource to help eliminate addiction in central Alabama.

“I’m 53 years of addiction and I’m not judging my father, grandfather, my brother or my nephew because I can walk out that door and get addicted,” Vest said. “God has been good to me. Through all this addiction he kept right there with me walking and holding my hand. He allowed me to go to school and work hard.”

For more information on the Shelby County Chamber, visit Shelbychamber.org.

By EMILY SPARACINO / Staff Writer WILTON – Wilton Baptist Church is preparing for its annual Christmas event for the... read more