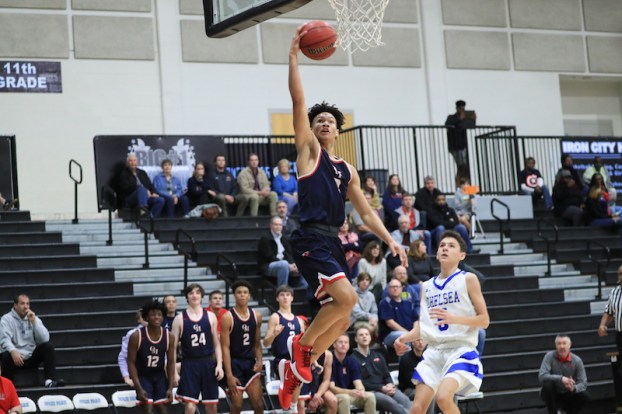 The Oak Mountain Eagles took down host Spain Park to claim the 2019 Jag Classic on Tuesday, Nov. 26. (For the Reporter/Dawn Harrison)

HOOVER – After taking down Gardendale and county foe Chelsea in the first two rounds of the 2019 Jag Classic, the Oak Mountain Eagles cemented a spot in the championship game against host Spain Park on Tuesday, Nov. 26.

Spain Park also entered the championship of its own tournament with three consecutive wins, setting up a solid championship game, but the Eagles instilled their offensive prowess in the first and third quarters to eventually pick up a double-digit 59-47 win.

A big reason for the success in the title game was Zane Nelson, who got his 30-point night started with a strong opening quarter that featured eight points behind two made 3-pointers.

His two made shots from beyond the arc were two of five 3-pointers in the quarter, as Noah Young, Wilder Evers and Brady Dunn all knocked one down as well to help the Eagles score 19 points in the frame.

Spain Park, on the other hand, was only able to knock down one from beyond the arc, as the Jags only put up 12 points to fall behind by seven at the end of one.

But the Jags put together a much more spirited effort defensively in the second quarter. Oak Mountain only hit one deep ball in the period and added just eight total points.

The problem was that shifted the game to a much more defensive pace, which kept Spain Park from finding a ton of offensive success. The Jags only posted nine points in the period, but were able to trim the deficit from seven points to six at the half with the Eagles in front 27-21.

Coming out of the halftime break, Oak Mountain was able to make adjustments on the offensive end of the floor to get back to the strong scoring it showed in the first quarter, while the defense posted a third consecutive strong quarter.

Nelson himself outscored the Jags behind a 17-point period thanks to seven made field goals, including three 3-pointers. Beyond that, Evan Smith added an and-1, while Young knocked down both of his free throws to help the Eagles post 22 points in the period.

That was more than enough to help Oak Mountain open up a dominant lead after holding the Jaguars to just 10 points in the frame to take a 49-31 lead into the fourth quarter.

In the final period, Spain Park was able to make one final push behind strong play from Cam Crawford with seven points. But despite the Jags’ best offensive quarter of the game with 16 points, it wasn’t enough to overcome the 18-point deficit, as the Eagles posted 10 more points to complete the 59-47 victory.

Nelson ended up finishing with a game-high 30 points to earn the tournament MVP award. Young added 10 points, while Will Shaver posted six points, four rebounds and three blocks as he continues to get in shape following a wrist injury before the season.

Spain Park got 18 points from Cam Crawford, 13 of which came in the second half.

After the tournament, Oak Mountain improved to 3-2 with three straight wins, while Spain Park moved to 5-3.

By SETH HAGAN | Special to the Reporter ALABASTER – The Thompson Warriors went into their Thanksgiving break in style... read more