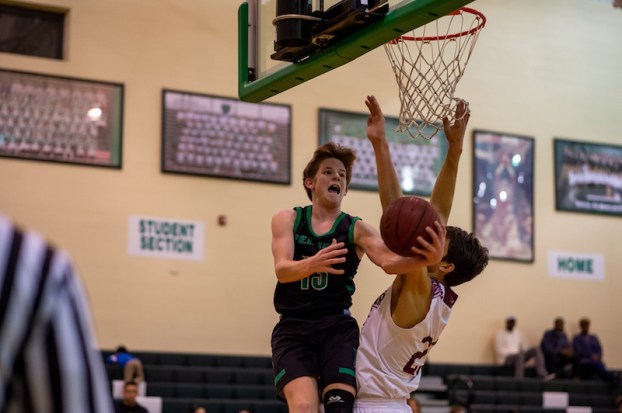 The Pelham boys and girls basketball teams both put together 3-0 weeks at local Thanksgiving tournaments to take home titles. (For the Reporter/Larry Dancy)

LEEDS – It was a special Thanksgiving week for the Pelham boys and girls basketball teams, as both finished the week undefeated to claim tournament championships.

For the boys, the week started with a resilient “Flu game” as it was referred to by head coach Joel Floyd, who said the program had been hit by the flu heading into the game on Saturday, Nov. 23.

Still, a resilient group was able to fight through that battle for a one-point victory. It didn’t come without a scare, however, as the Panthers trailed 59-58 with 10 seconds remaining, but Josh Lacey continued an impressive season thus far with a game-winning basket to give his team a 60-59 victory in the first round.

He led the Panthers with 16 points, while Blake Floyd added 14 and Kendan Maddox 12 in the victory.

Pelham followed that with a dominant showing against St. Clair County in the semifinals of the tournament thanks to another impressive performance from those three scorers, including a stellar game from Floyd. He posted 22 points in the 62-43 win, while Lacey added 17 and Maddox 11.

That led the team that was battling the flu into the championship game looking to finish off an exhausting but strong week.

Taking on Pell City, the big three had double digits yet again, while the defense played a strong second game in a row to lead Pelham to a 48-44 championship win.

Floyd ended up leading his team for the second day in a row with 14 points, while Maddox posted 13 and Lacey 11 to help bring home the title.

But the highlight of the week was none other than the performance from Pelham girls’ freshman Laci Gogan, who started the Northridge tournament off with a bang.

She knocked down eight 3-pointers against Hamilton in the first round to post 36 points one day after her birthday, while also adding four steals and three rebounds. She had more than half of her team’s points in a 61-54 victory to advance to the semifinals.

That seemed to spark something in the rest of the team moving into their next game with Cornerstone. Taking on the Eagles, every player scored in the game led by Gogan again with 21 points on 8-11 shooting, including four more 3-pointers. Behind her, Jaslyn Heflin played a big role with 15 points, while Emma McKenney posted eight rebounds and five blocks to help the Panthers pick up a 75-10 win to advance to the championship game.

In the championship game against the host Northridge Jaguars, Pelham fought through a tough first half, before flipping a switch defensively in the second half.

The Panthers held Northridge to just three second-half points to eventually pull away for a 50-32 win to claim the title.

Gogan led the way again with 16 points and three steals, while McKenney added 13 points and seven rebounds. Victoria West ended with 10 points, while the team had 21 steals and 20 assists in the win.