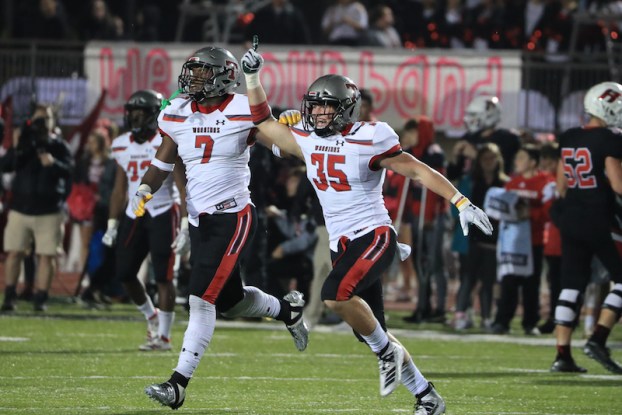 The Thompson Warriors will look to redeem a 52-7 loss to Central-Phenix City in last year’s state championship game with a rematch on Wednesday, Dec. 4, inside Auburn’s Jordan-Hare Stadium. (File)

Shot at redemption: Thompson set for rematch with Central-Phenix in 7A title game

Coming into the 2019 season, Thompson quarterback Sawyer Pate and receiver Mike Pettway vowed they weren’t going to let this year’s team take a step back after the Warriors advanced to the state championship game a year ago. That all despite losing one of the best quarterbacks in state history, basically its entire offensive line and most of its key defenders.

“We expect to be back in the state championship,” Pettway said over the summer. “People are going to doubt us, but they haven’t seen the work we’ve put in and people are going to be surprised at what Sawyer can do. He’s going to prove a lot of people wrong this year.”

Pettway was right, and those two seniors held true to their word. Connecting for more than 1,000 yards through the air between the two of them, they led Thompson to an 8-1 regular season and a 3-0 postseason through the semifinals of the Class 7A playoffs to punch their second consecutive ticket to the championship game.

But now comes the true test. Having worked so hard to get back to this moment, can the Warriors put together one last special performance on Wednesday, Dec. 4, at 7 p.m. inside Jordan-Hare Stadium and get over the hump of last year’s 52-7 loss to Central-Phenix City in the title game?

This year, it’s the same team, but a different opportunity.

Last year, it was a first-time experience—one the Warriors didn’t handle well. Nerves, playing relaxed at times and Pate forced into action as a backup all played a factor in the lopsided loss.

“We realize what happened, and we know what we need to do,” Pettway said.

Thompson will be taking on the defending champs, who have the confidence of last year’s dominant win, while also bringing in a 12-game win streak following a season-opening 17-14 loss to Hoover.

The main reason for that success of the Red Devils has been the consistent and relentless effort defensively.

Over their last eight games, the Red Devils have given up seven points or less six times, including in five straight, and have given up 13 or less in seven of those eight games with 26 points given up in a 53-26 win over Lee-Montgomery being the most in that span.

It’s a defensive unit giving up 12.1 points per game so far this season, and one that has yet to give up more than 28 points in any game.

That’s a tall task for Thompson’s offense, but the Warriors bring in arguably the best offense that Central will have faced this season.

Thompson is averaging 42.9 points per game and has scored 33 or more points in all but one game (29) this season, including 40 or more seven times and 51 or more three times.

One of the main reasons the Warriors are so difficult to defend is the multitude of playmakers on the offensive side.

Pate has more than proven he can lead this offense so far this season with 3,000-plus passing yards and close to 40 touchdowns. His trust in multiple players is also a big deal with Pettway, J.B. Mitchell and Tre Roberson all receivers capable of 100 yard games.

In addition to that, Thompson also has JoJo Gaiters, Jarrett Crockett and Brandon Franklin in the backfield at running back.

While Taulia Tagovailoa was the starting quarterback, he was injured throughout the week leading up to the game, which forced Pate to prepare as the starter.

Now, he has the experience of what it takes to get ready for a big game and has game experience against the same team he’ll face this year.

I expect that to pay dividends this week. The offense, with a good game plan and confidence, should be able to make more noise than it did a season ago with the talent on that side of the ball as long as the offensive line is up to the task against a great defensive front.

The bigger concern for the Warriors will come defensively in multiple facets of the game.

Any time the Warriors have struggled with those two things, they struggle to close out games and they also had their lone loss of the season.

And while both of those things will be key again this week, so to will be early-down play and limiting big plays.

Basically, that side of the ball is going to have to play perfect all night to pick up a win.

If Thompson can force Central-Phenix into third-and-long situations and keep them from finding explosive plays, that will win the game. That’s what worked well against Hoover in the semifinals, and it will also give that side of the ball a lot of confidence if they’re able to pick up some early tackles for loss.

Central quarterback Tucker Melton and receiver EJ Williams, a Clemson commit, will be a major focus of the defense. The main key to slowing down the offense will be containing the ground game of Joseph McKay and also pressuring the backfield to limit what Melton is able to do throwing the football.

Thompson has a ton of Division-I talent on its defense, but most of it is young. How those players handle this environment will possibly be the biggest key in the game.

There is no doubt that Thompson has the talent to win this game. They’ve proven that all season with two wins over Hoover—the only team that beat Central.

But this one is different. Thompson has everything to prove, while Central-Phenix City has already proven it’s a team that can win this game and do so in dominant fashion.

I need to see Thompson prove that same thing. It’s all up to the Warriors. The anger and bitterness of last year’s disappointment has to run through their veins and fuel them to play harder than they have all season for every play of this game. Anything else, and the Red Devils will make them pay.

I won’t be surprised by a Thompson win, but they need to prove it to me, to their coaching staff and to the city of Alabaster.

By SETH HAGAN | Special to the Reporter ALABASTER – The Thompson Warriors went into their Thanksgiving break in style... read more