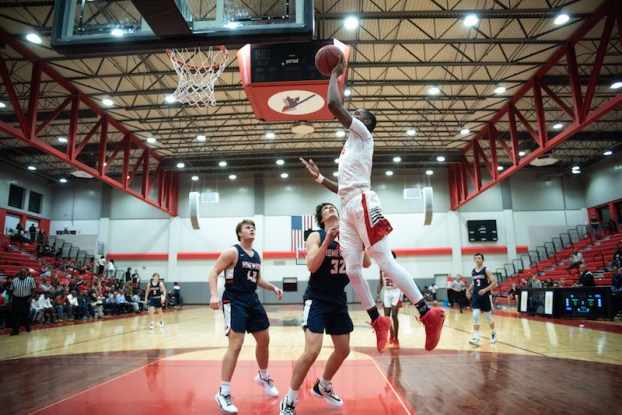 The Thompson basketball team finished its Thanksgiving basketball tournament a perfect 3-0 to win the championship with a 59-47 victory against Calera. (Reporter photo/Keith McCoy)

The tournament expanded in its second year to include eight teams and, the Warriors took wins against Bibb County and Huntsville to advance to Wednesday’s championship. Calera won games against Spanish Fort and Northridge.

“Going into the season we definitely wanted to beef up our schedule a little bit,” said Thompson head coach Dru Powell. “It was good to beat Bibb County who was a final four team last year, it was great to beat Huntsville who knocked us out of the state tournament last year. Then obviously it was good to beat Calera who’s got another good team this year and we hope everybody had a good time at the tournament.”

The championship was a rematch of last week’s game between Thompson and Calera with the Warriors taking the win 75-67 at home.

The Warriors jumped out again in the first quarter on the strength of Zach Littleton’s 10 points. Littleton hit the team’s only two shots from long range to give them a 14-8 lead after the opening period.

Brad Lewis’ two free throws to start the second quarter gave Thompson its biggest lead of the game until the end of the quarter, as Calera made its move.

The Eagles were extremely disruptive on the defensive end taking the Warriors out of their flow and Jamarius Ford took over scoring all six of his points in the quarter.

Neither team could mount a big run, however, and Thompson took a 23-20 lead into the half.

The Warriors scored six of the first eight points after halftime, but it was Calera’s Duke Chambers who then took up the mantle for the Eagles. He and his teammates found huge success driving to the basket as Thompson looked to tightly defend the perimeter.

Calera seemed to have an answer every time the Warriors found a little rhythm offensively. With the 3-point line shut down, Thompson found solace at the free throw line where the Warriors took 20 attempts over the last three quarters.

Jack Dolorek also scored six of his eight points in the third quarter to keep Thompson in front going into the fourth.

The Eagles mounted their final offensive run to begin the final quarter, as Chambers and Paris Whatley continued to make noise in the paint. Their 11-5 run gave the Eagles their only lead of the game at 45-44 off another runner from Whatley.

However, that would be the last made basket for Calera the rest of the game.

Lewis scored the first four points of the quarter for Thompson, including a big alley-oop, but it was his defense that proved the most valuable late in the championship.

He single handedly shut down the middle in the waning moments with three key blocks and big rebounds to keep the Eagles off the scoreboard.

“Brads a very athletic player. He can affect the game from both ends of the floor and he’s a very good player for us,” Powell said. “He had a couple blocks and a couple big buckets for us.”

Thompson went on a 15-2 run to finish the game and hit seven of its last eight from the charity stripe to seal the victory. Littleton led the Warriors in scoring with 12 points. Lewis nearly had a double-double with 11 and eight rebounds, while Chaney Johnson and Grant Hopkins each added 10.

Hopkins was named tournament MVP for his efforts in all three of the week’s games.

“Grant is an extremely hard worker. His GPA is over 4.5 and he’s one of the leaders on our team,” Powell said. “Over the course of three days, he played very well as did several of our guys and I’m very proud of him for winning that award, it was certainly deserved.”

Chambers led all scorers with 14 for Calera, while Whatley and Jordan Eggleston pitched in eight points each.

On a mission: Thompson beats Hoover, advances to 2nd consecutive 7A title game

By ALEC ETHEREDGE | Sports Editor ALABASTER – Since summer workouts started, the Thompson Warriors had one thought on their... read more