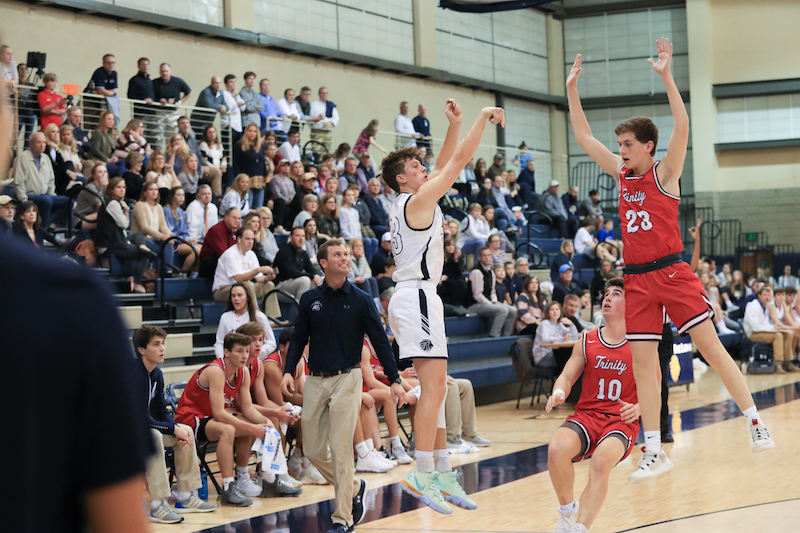 Briarwood remained unbeaten on the season against Locust Fork on Tuesday, Dec. 3, thanks to 15 made 3-pointers. (For the Reporter/Dawn Harrison)

LOCUST FORK – The Briarwood Lions remained the only unbeaten boys basketball team in Shelby County on Tuesday, Dec. 3, thanks to another dominant effort on the road with a 70-44 victory against Locust Fork.

Following a Thanksgiving break where the Lions (5-0) won two tournament games, they returned to action without skipping a beat thanks to a remarkably fast start for a high school basketball games.

Briarwood put together two impressive quarters in the first half to come close to totaling 50 points, and it started with a 25-point opening period behind just three players.

The reason the Lions had such a strong start despite the limited help was due to the impressive shooting display Chance Beard, Ryan Donohoo and Hayden Lamey put together from beyond the arc.

Those three knocked down a combined six 3-pointers, including three from Donohoo, two from Beard and one from Lamey. Beard and Donohoo each finished the quarter with nine points, while Lamey was just behind with seven himself.

That was more than enough to help the Lions take a commanding lead early in the game, as the defense held Locust Fork to just 10 points to take 15-point lead at the end of one.

That was just the beginning of a dominant first half for Briarwood, who came out and continued firing away in the second quarter. The Lions knocked down four more 3-pointers in the period, including two more from Donohoo.

He went on to post eight more in the quarter for 17 first-half points. BCS also got more help in the frame thanks to seven different scorers, which played a key role in helping the Lions double up Locust Fork by taking a 48-24 lead into the half.

Coming out of the break, Briarwood’s offense wasn’t quite as good as the first half, but it still did enough to continue extending the lead, while the defense arguably played even better in the final two quarters.

In the third quarter, the Lions got two more 3-pointers from Lamey and one apiece from Donohoo and Sam Russell to post 15 points, while the defense played its best quarter of the game, limiting Locust Fork to nine points.

That helped Briarwood extend its advantage to 63-33, as the Lions were still doubling up the home team ahead of the final period.

In the fourth quarter, Briarwood played more conservative offensively, which limited the offense to just seven points, but it proved to be valuable experience for John Elliott, Stratton Ponder and Will Brewer, who each got to score points in the period.

Locust Fork put up 11 points to outscore BCS 11-7 in the frame, but Briarwood still walked out with a dominant 70-44 win.

In all, Briarwood knocked down 15 3-pointers, six of which came from Donohoo as part of a game-high 20 points. Lamey finished with 15 points behind three made baskets from beyond the arc, while Beard added 12 points with three 3-pointers himself.