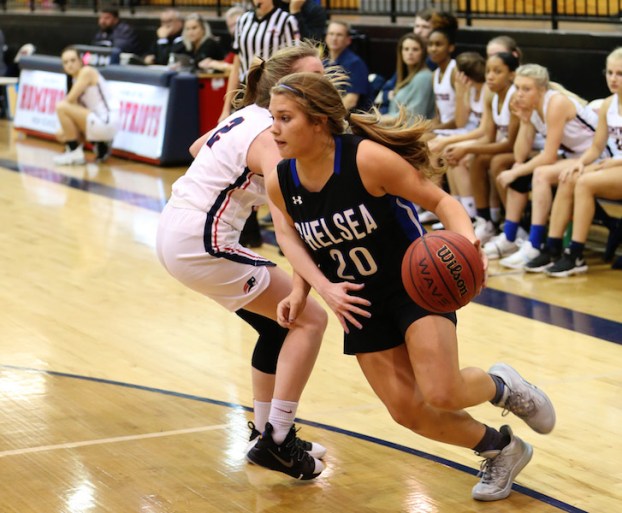 The Chelsea girls’ basketball team took down rival Oak Mountain on Tuesday, Dec. 3, to improve to 8-2 on the season. (For the Reporter/Cari Dean)

NORTH SHELBY – Thanks to a fast start in the first half, the Chelsea Hornets were able to continue an impressive 2019-20 season with a 59-41 road victory against rival Oak Mountain on Tuesday, Dec. 3.

The Hornets (8-2) picked up their fifth consecutive win after going 3-0 in the Marble City Classic during Thanksgiving break, while Oak Mountain fell to 2-5 on the season.

Chelsea imposed its will early in the game with an impressive start on both ends of the floor, both of which helped the Hornets take a double-digit lead at the end of the opening quarter.

Offensively, Sydney Schwallie and Pressley Rains each hit a 3-pointer and made both of their free throws for five points in the period, while Jordan Parker made two field goals for four points. Those three combined for 14 of the 19, while Sophia Brown and Ellen Fleming had the other five points.

A big reason the offense saw that success, however, was thanks to a spirited effort on the other end of the floor, where the Hornets held Oak Mountain to just two made shots and five total points in the quarter.

With the combined determination on both ends, Chelsea was able to take a 19-5 advantage at the end of one.

Oak Mountain bounced back slightly in the second quarter with a better effort both offensively and defensively. The Eagles doubled their first-half total with 10 points behind two 3-pointers from Abi Brown and Abigail Gordon, while the defense held the Hornets to 13 points in the quarter.

But those 13 points, five of which came from Parker, were still enough to help Chelsea extend its lead to 32-15 heading into the halftime break.

During the half, the Hornets were able to figure out what was working so well in the first quarter and went on to duplicate it in the third quarter.

They came out firing on offense again to post their second best period of the game with 17 points thanks a balanced attack featuring two made 3-pointers and a 4-4 mark from the free throw line.

That helped take the pressure off the defense, and while Chelsea gave up 12 points in the period, it didn’t matter, as the Hornets continued pulling away by extending their advantage to 49-27 ahead of the fourth quarter.

In the final quarter, the Hornets looked to just put the game away and limit Oak Mountain’s offense, which in turn held Chelsea’s offense in check for the most part.

That allowed Oak Mountain to put together a slight push with the Eagles’ best offensive quarter of the game at 14 points behind eight made free throws from Brown and Hudson Durrett.

But Chelsea also capitalized on free throws, making six of its eight free throws in the quarter to seal the 59-41 win.