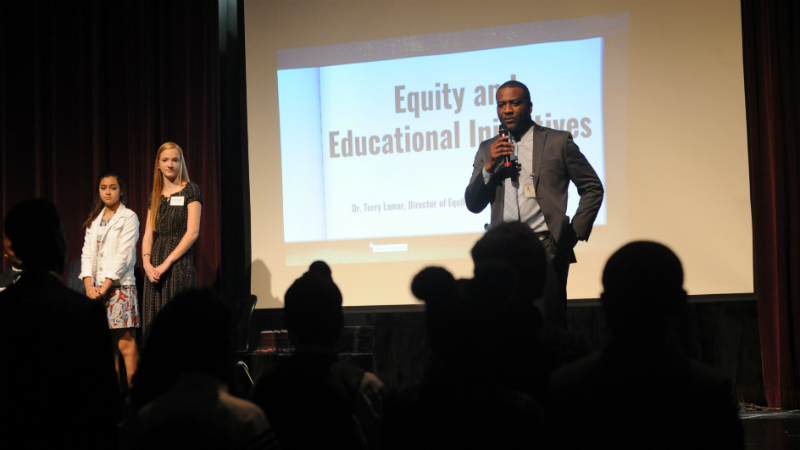 HOOVER – Hoover City Schools held a forum on Monday, Dec. 2, to inform the public about its equity and educational initiatives, and give stakeholders an opportunity to ask questions and offer feedback.

HCS Superintendent Kathy Murphy noted that the forum held at Hoover High School was the third community meeting held as part of the effort to ensure the school system serves all students.

“Tonight is about all students and all colors and all ethnicities and all religions,” Murphy said, and added that all students have both gifts and challenges, and deserve to be free of all barriers that would hinder their educational opportunities.

Murphy pointed out the difference between equality and equity, explaining that equity means that each student receives a personalized form of support to ensure he or she succeeds.

Before Terry Lamar, director or equity and educational initiatives, spoke about the core of the school system’s effort, Director of Curriculum and Instruction Autumm Jeter gave an academic update.

Hoover City Schools earned an overall score of 94 (considered an “A”) on the Alabama State Education Report card released in October, Jeter said, an improvement from the 90 the system received last year.

“We in Hoover City Schools were very, very proud of the progress we’ve made,” Jeter said and added that the system saw significant improvement in the “Progress in English Language Proficiency” category.

Lamar reviewed steps taken in the equity and educational initiatives effort, including diversity training, responding to teachers’ questions, reviewing parent and teacher focus group findings, creating plans unique to each school that addresses the findings, developing an implementation plan and conducting a survey to find anything that was missed or that needed to be added to the overall plan.

Lamar urged those in attendance to support school officials in their effort.

“All I would ask you for is an opportunity—an opportunity to fail or succeed,” Lamar said. “At least give us that opportunity because we are one family in Hoover.”

Feedback on the initiatives was given by consultants Donna Elam and Verdell Roberts of the Elam Leadership Institute, and then a panel discussion was conducted.

Attendees had a chance to ask questions about the process before the end of the forum.