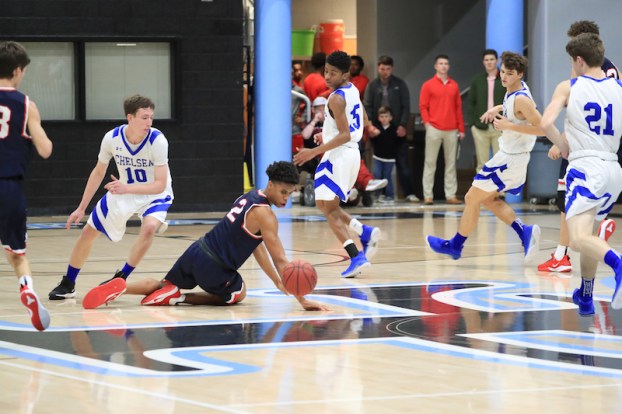 Oak Mountain got a strong night from Noah Young to take down rival Chelsea for the second time in a week for the Eagles’ fourth win in a row. (For the Reporter/Dawn Harrison)

NORTH SHELBY – A 21-point third quarter from the Oak Mountain Eagles broke a tight game at the midway point with rival Chelsea to lift the Eagles to their fourth consecutive win by a final score of 58-38 on Tuesday, Dec. 3.

Returning back home after winning three games in a row to claim the 2019 Jag Classic during the Thanksgiving break, the Eagles didn’t let a few days off slow them down.

But early on, the Hornets seemed to have an answer for what Oak Mountain was bringing to the table thanks in large part to Andrew Messier and Bryant Royster.

Messier posted six points in the opening quarter to help lead Chelsea to 11 in the period. Oak Mountain, however, had an answer in the form of 3-pointers from Noah Young and Wilder Evers, as well as four points from Trey Sullivan.

The balance from the Eagles was the difference in a 13-11 quarter that put them in front by two early on.

But the difference in the two teams at that point seemed minute thanks to the physical and defensive nature of the game. Despite being outsized, Chelsea held its own and put forth an even better effort in the second quarter.

Five points from Royster, an and-1 apiece from Holton Smith and Jacob Tierney and a basket from Paul Lanzi helped the Hornets post 13 points in the period.

And with a consistent defensive effort, Chelsea was able to equal the total of Oak Mountain, who scored 13 points for the second period in a row. The Eagles were able to take advantage of two more 3-pointers from young and one from Brady Dunn in the period to keep from relinquishing the lead, taking a 26-24 advantage into the half.

Coming out of the halftime break, however, the Eagles made some adjustments offensively and took advantage of the hot hands of Young and Dunn.

Those two combined to make four 3-pointers in the third quarter, two each, while Young also added another field goal to complete his 19-point night through three quarters of play. Those two scorers, as well as an additional 3-pointer from Luke Love and four more from Sullivan helped Oak Mountain post 21 points in the quarter.

Equally as impressive, the Eagles were able to turn up the intensity defensively and limit Chelsea to 10 points in the frame, which allowed them to extend their lead from two points to 13 heading to the final period.

At that point, Oak Mountain relied heavily on its defense to close out the game in the final quarter. The offense added 11 more points in the fourth, which was more than enough to close out the game, as the defense closed out a dominant night by giving up just four points.

The Eagles were led by Young with 19 points thanks to his five made 3-pointers, while Dunn added three 3-pointers for nine points and Sullivan had eight.

Chelsea was led by nine points from Royster, while Messier had seven.