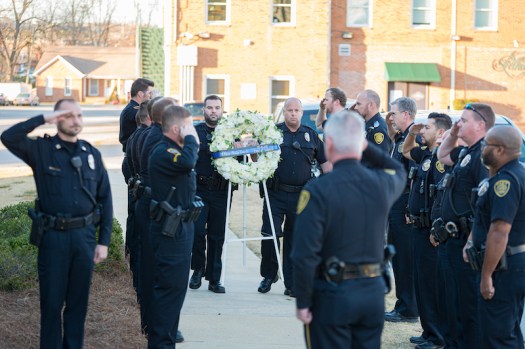 Members of the Pelham Police Department carry a wreath honoring the late Philip Davis during a ceremony on Wednesday, Dec. 4. Davis was shot and killed during a traffic stop on Interstate 65 on Dec. 4, 2009. (Photos For the Reporter/Jeremy Raines) 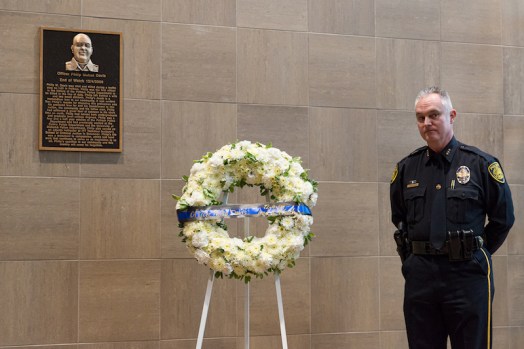 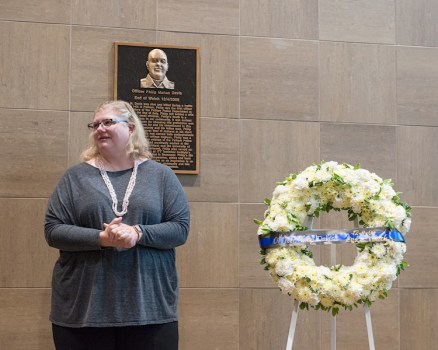 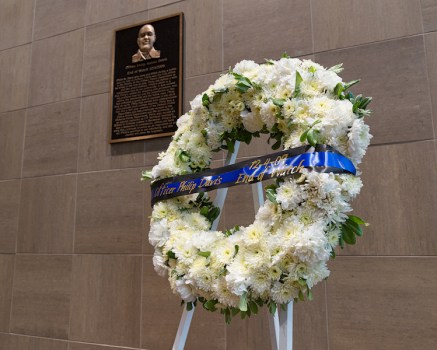 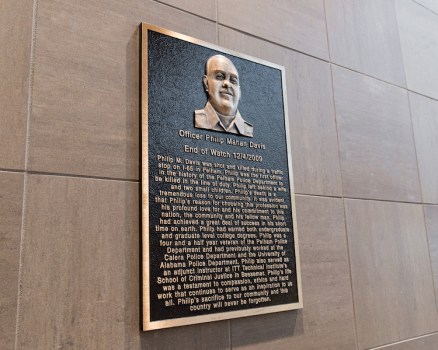 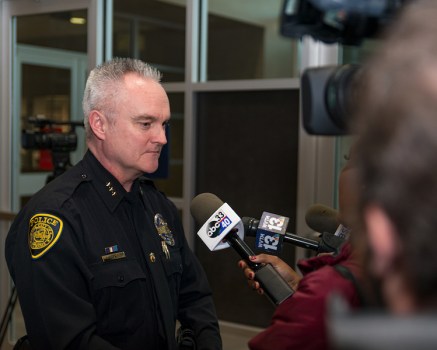 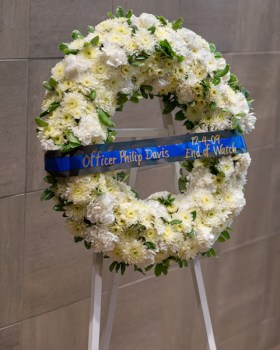 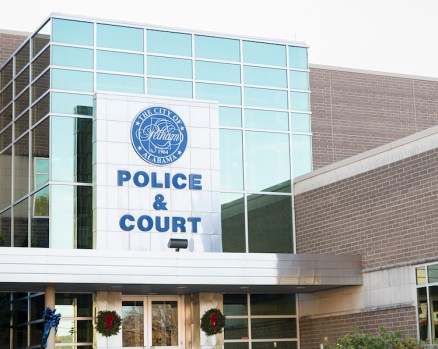 PELHAM – It’s been one decade since Pelham Police Officer Philip Mahan Davis made the ultimate sacrifice, but since that tragic night on Dec. 4, 2009 the department has never lost the bond it has for one another. 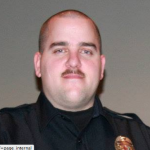 Wednesday, Dec. 4, marked 10 years since Davis was shot and killed during a traffic stop on Interstate 65. Davis was Pelham’s first police officer to be killed in the line of duty.

One decade later, members of the Pelham Police Department and community members filled the lobby of the PPD headquarters for a wreath laying ceremony to once again remember the ultimate sacrifice Davis made while fulfilling his duties.

“We’re here today to honor our fallen brother Philip Mahan Davis,” Interim Pelham Police Chief Pat Cheatwood said. “A lot of us in this room worked with Philip and some of us didn’t but his legacy lives on in our department. We miss him every day. We miss his laughter, we miss his smile and we very much miss his sarcasm. He gave the ultimate sacrifice in law enforcement and we’ll never, ever forget his sacrifice. It’s hard to believe it’s been 10 years but he made a lasting impression, not only on this department, but in this community.”

A wreath with white flowers adorned with a blue and black ribbon that read “Officer Philip Davis–12-4-09–End of Watch” was placed inside the lobby of the Pelham Police Department right beside the plaque that permanently remembers Davis and his sacrifice.

“A lot of us cried on each other’s shoulders 10 years ago and we swore that we would never lose the bond we had at that moment,” Cheatwood said. “Unfortunately, it took Philip losing his life for us to have that bond but we never learned to lose it. That’s something we need to strive for every day is to never lose the bond in this police department family and this community.”

Amy Davis, Philip’s sister-in-law, attended the wreath laying ceremony and said the support shown to her family throughout the years has been much appreciated.

“This is just breath taking and it’s an amazing community,” Davis said. “We’re just so grateful for your support and for being here today and helping us remember such an amazing spark of light in this world. Y’all please stay safe. We pray daily for you and we care so deeply for you and your families.”

Shortly after Davis’ death, the city of Pelham renamed the street where the Pelham Police Department sits to Philip Davis Street, and his wife, Paula, made it her mission to help the families of other law enforcement officers who die in the line of duty.

The foundation has provided financial assistance to families, flown families in for funerals and sponsored safety training for first responders.

For more information on the foundation, visit Officerphilipdavis.com.