Dennis Bourland became a Gold Star parent when his son, Kenneth, was killed during active duty in Haiti on Jan. 12, 2010.

Kenneth Bourland was a lieutenant colonel in the Air Force. He was 37 years old. 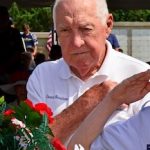 “He joined because he wanted to fly,” said his father, Dennis. Kenneth left behind his wife and two sons (a 1-year-old and a 3-year-old at the time). His tenure in the Air Force spanned 15 years.

Becoming a Gold Star Father (peer mentor) allowed Dennis and Adrienne, his wife of 51 years, to continue their own healing while helping others work through their grieving process.

For the past eight years, Dennis has been a Tragedy Assistance Program peer mentor. He provides one-on-one guidance and encouragement while instilling hope in those who are struggling to move through their own pain.

The program offers a host of resources to aid the survivors of men and women who have died in the wake of active duty. Services include, but are not limited to, seminars, retreats and an online community. TAPS have delegations in 33 countries.

A United States Air Force veteran, Dennis served honorably for four years as an Airman 1st Class. Dennis is also a volunteer with the Alabama National Cemetery Support Committee and Wreaths Across America.

He enjoyed a 30-year career at BellSouth, where he held a variety of positions. He was a part of the ground-breaking technology era of caller ID and other telephone services.

He later entered the field of construction of telephonic systems as contractors. During his BellSouth career, Bourland was a member of the company’s Telephone Pioneers of America (now called Pioneers). Active from 1980 until 1995, Dennis served as the state Environmental Chair.

He participated in fundraising efforts that supported the organization’s education programs, life enrichment for people with disabilities and for senior citizens, stocking area food pantries and responding to natural disasters, environmental and beautification initiatives and projects that support, service men, women, veterans and their families.