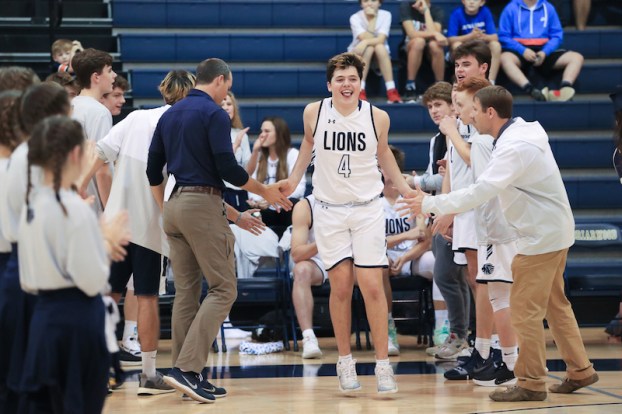 Briarwood’s Ryan Donohoo knocked down five 3-pointers to help lead the Lions to a 72-52 victory over Benjamin Russell. (For the Reporter/Dawn Harrison)

NORTH SHELBY – Briarwood’s offense continued to roll on Thursday, Dec. 5, as the Lions put up 72 points in a 72-52 victory against Benjamin Russell to remain undefeated on the season at 6-0.

The Lions have now scored 60 or more points in every game this season, including 70 or more three different times.

This time around, Briarwood got points from nine different players, and eight of those nine had at least five points in the dominant effort, including double figures for Ryan Donhoo, Hayden Lamey and Chance Beard.

While the first quarter of the game was closely contested with the Lions outscoring Benjamin Russell 13-9, the second quarter was where the game really shifted in their favor.

After hitting two 3-pointers in the opening period, Briarwood connected on more in the second with four shots from beyond the arc finding the bottom of the net.

Donohoo continued his hot shooting this season and posted two 3-pointers in the frame, while Chase Travis and Lamey each added one as well. In all, the Lions totaled a game-high 23 points in the second quarter, while the defense only gave up 15 points.

That allowed Briarwood to extend its four-point lead to 12 at 36-24 heading into the halftime break.

Coming out of the half, the Lions didn’t let up on their deep shooting. Donohoo and Travis knocked down a combined three more 3-pointers, while Lamey posted four points to help them post 20 more points in the period.

Benjamin Russell only mustered up 14 more points, and while that’s normally not bad at the high school level, Briarwood had outscored the Wildcats 43-29.

That allowed the Lions to grab a strong 56-38 lead into the final period of the game.

In the fourth quarter, Briarwood only scored 16 more points, but the Lions held Benjamin Russell to 15 or less for the fourth consecutive quarter at 14 points to pull away for the easy 72-52 victory.

Donohoo led the way for the Lions with 15 points thanks to five made 3-pointers, while Beard and Lamey each had 11 points in the win. Behind that, Travis added eight points and Landon Nuyt had eight points.