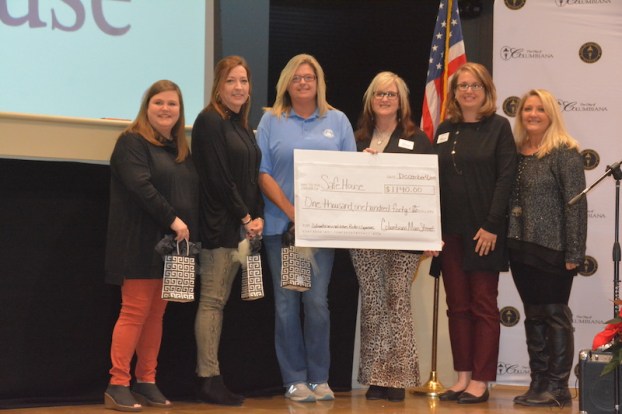 COLUMBIANA – Residents heard an update on numerous business and community happenings at the quarterly Columbiana Mayor’s Breakfast on Dec. 4 in the Grande Hall at Old Mill Square.

Mayor Stancil Handley gave a “state of the city” presentation, covering topics such as new business openings, subdivision updates and progress on the Old Mill Square facility and grounds.

“I feel like we’re being bombarded in Columbiana by good things,” Handley said. “It’s the place to be, and people are starting to find that out.”

New businesses include Designs Salon and Spa on Shelby County 47 South; La Patrona, a Mexican restaurant in the former Annie’s Place location near Shelby County High School; and Dollar Tree in the Columbiana Square Shopping Center, where Winn-Dixie was located.

The 30,000-square-foot Old Mill Square facility, which houses the Shelby County Arts Center and a multipurpose venue, is mostly complete. Work has started on the grounds, where sculptures by artists Ted Metz and Nelson Grice will be installed, along with a three-tiered fountain from Milan, Italy.

“We plan on holding tons of events here,” Handley said of the venue. “The county seat needs to have class and dignity, and I think this building is a big part of that. It puts Columbiana on another level.”

Regarding community happenings, Columbiana Main Street Director Brenda Sands said the city’s first Witches Ride that kicked off the 2019 Monster Walk was a success, raising $1,140 for SafeHouse of Shelby County.

“This collaboration couldn’t have been possible without these three women,” Sands said, adding local businesses also contributed to the event through sponsorship and donations. “The event was totally donor and volunteer based, and we’re very proud of that.” 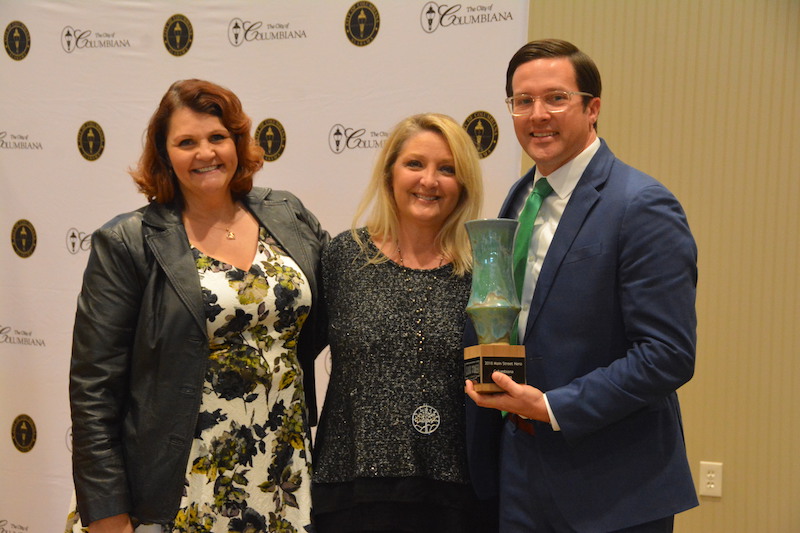 Mary Helmer of Main Street Alabama and Brenda Sands of Main Street Columbiana present Kyle Mims with the Main Street Hometown Hero Award on Wednesday, Dec. 4 during the Mayor’s Breakfast at Old Mill Square. The award recognizes Mims for his sponsorship of Touch a Truck Columbiana, an event that allows kids to encounter first responder vehicles and other public vehicles up close and participate in fun activities. (Reporter Photo/Scott Mims)

Mims was unable to attend a banquet at which the Main Street awards were presented to each community’s recipients in August.

“It is a pleasure to receive this award,” Mims said. “This is a big honor.”

In other news, the first phase of the city’s new Springs Crossing subdivision at the intersection of Alabama 70 and Shelby County 26 is nearly complete, and work on homes in the second phase is slated to start in early 2020.

“Our young people are our treasure,” he said. “That’s what this growth thing is all about. It thrills my heart to see these young people who had to leave being able to come back.”

By ALEC ETHEREDGE | Sports Editor HOOVER – Thinking she was playing a Christmas wrapping game on the court, Jamie... read more