Chelsea’s Jordan Parker fights through contact to put up a shot. She posted 16 points, including six in overtime, to lead the Hornets to a big win over Homewood. (For the Reporter/Cari Dean) 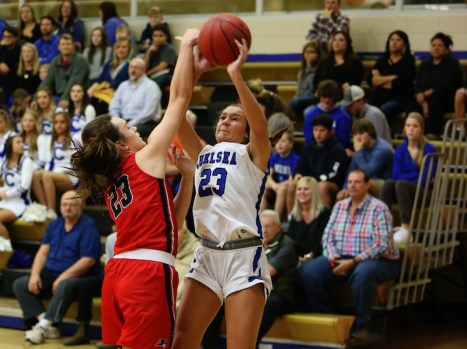 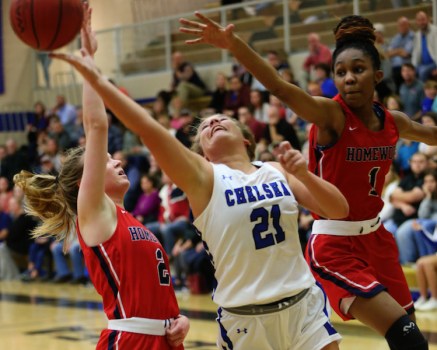 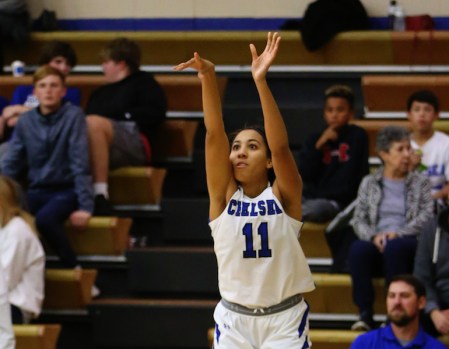 CHELSEA – The Chelsea Hornets have been rolling along early in the 2019-20 basketball season, and on Thursday, Dec. 5, the girls picked up another momentous win by taking down previously unbeaten Homewood 67-57 in overtime to earn their sixth consecutive victory.

The Patriots entered the matchup at 11-0, while Chelsea was 8-2. But thanks to a 6-6 mark from the free throw line as a team in overtime and six overtime points from Jordan Parker, the Hornets ended up outscoring Homewood 14-4 in the extra period to take home the 10-point win.

Parker was strong all night, finishing with a team-high 16 points, while the team finished with four scorers in double figures. A big reason for that balanced effort was a 17-22 mark from the free throw line as a team.

That strong shooting started in the first quarter of the game for Chelsea, as the Hornets made five of their six free throw attempts in the period and got a total of seven points from Sydney Schwallie.

She played a big part in a 12-point quarter for Chelsea, but Homewood’s offense also came ready to play, putting up 15 opening-quarter points to take an early three-point lead.

But after the Patriots had used five different scorers in the first period to take the lead, Chelsea tightened up defensively in the second allowing just two scorers combined for 10 points.

On the other end, the Hornets knocked down two 3-pointers in the quarter and got a combined 14 points from five different players to flip the script and take a one-point, 26-25 lead into the halftime break.

Coming out of the half, Chelsea’s offense had seemingly gained a ton of confidence offensively, and the Hornets took advantage of that in the third quarter.

Pressley Rains and Ellen Fleming combined for 11 points, while five different players scored for the second quarter in a row to help Chelsea post a game-high 19 points in the frame.

With the defense holding the Patriots to 12 points, the Hornets were able to extend their lead to 45-37 heading to the final quarter of play.

But in that final period, Chelsea’s offense struggled to regain that same consistency. While five players scored again, none had more than two points in the period and they missed two free throws to total just eight points.

Homewood capitalized behind a strong quarter from Kassidy Schnoer. The senior had eight points by herself in the period to bring her game total to 23 points.

She was also helped by a made 3-pointer from Alexandria Hershbine, as well as five combined points from other scorers to help the Patriots post 16 points in the quarter and tie the game at 53-53, which forced overtime.

Chelsea, however, put that sluggish fourth quarter behind them quickly, as shooters found their stroke again in overtime. Parker hit three field goals for six points, while Schwallie, Fleming and Mackenzie Titus all went 2-2 from the free throw line to post 14 points.

Defensively, the Hornets stepped up as well and allowed nothing to the Patriots who only scored four points in the extra time.