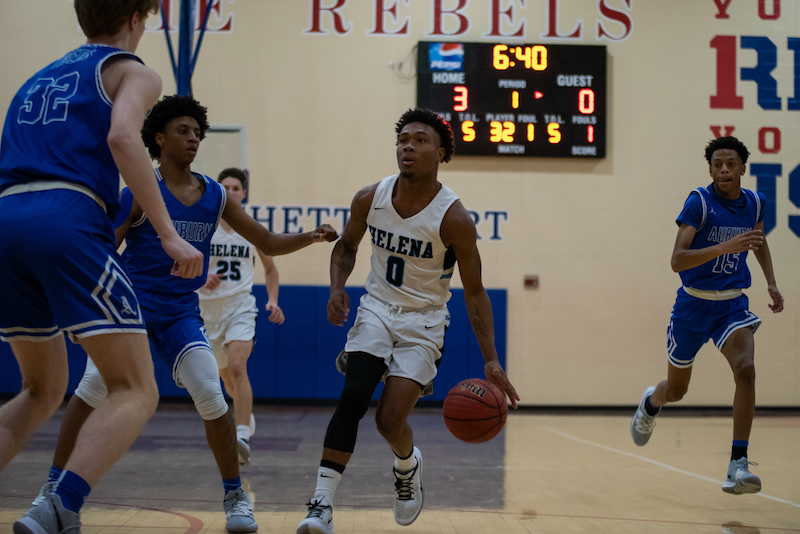 Helena's Daunte Cave (0) finished with 30 points against Hueytown but the Huskies fell in the last seconds 62-61 on Thursday, Dec. 5. (Reporter Photo/Keith McCoy)

HELENA – A last second foul was the difference in Helena’s tough loss to Hueytown on Thursday, Dec. 5, as the Huskies fell 62-61 to the Golden Gophers on their home floor.

The Huskies were led by senior guard Daunte Cave who topped all scorers with 30 points, as 14 of his points came in the fourth quarter. Cave was also an impressive 18-of-21 from the foul line.

In a back-and-forth game, Helena trailed by just one at the end of the first quarter and trailed 24-20 at halftime.

Helena’s other senior guard Caden Pierce also had a big night scoring as he finished with 19 points and four 3-pointers.

Entering the final period, the Huskies trailed 43-39 and while Cave had a big fourth quarter, Hueytown’s Caullin Bracy also carried the Golden Gophers with 25 points and 13 points in the fourth quarter.

For the game, Hueytown’s weakness was foul shooting as the Golden Gophers finished just 11-of-21 on the night amounting to 52 percent.

However, in the final seconds of the game Hueytown was able to make 1-of-3 foul shots to escape with the one-point win.

Helena will look to rebound next week against Chilton County, McAdory and Clay Chalkville.