HOOVER – Thinking she was playing a Christmas wrapping game on the court, Jamie Langford McQueen fumbled around with wrapping paper trying to wrap an item not knowing who was standing feet away watching.

As she stood up, and had her blindfolded removed, she went from complete darkness to her eyes opening to the sight of her twin brother John Tyson (JT) Langford—a sight she hadn’t seen in close to two years.

As the blindfold came off, McQueen looked down to the right and pulled her hair back, before then looking up to the unexpected sight. With a delayed reaction of jubilation almost in disbelief, she fell to her knees as emotions overcame her.

But she quickly returned to her feet and was wrapped into a moving hug by her brother as tears filled her eyes.

Painting a background behind them was an American flag held up by Spain Park students to celebrate the return home for Langford, who had been deployed overseas in the United States Army for the last two years.

“Best Christmas ever!” McQueen posted to Facebook after the game. “Thank you to everyone who made this so special to me. I am the worst at being surprised because I nag until someone tells me, but I swear, I had no idea this was coming. My bubby is home for Christmas.”

As an athletic trainer for Spain Park, McQueen just assumed she was part of a funny game, but while she was wrapping the presents blindfolded, she didn’t realize unwrapping her eyes from the blindfold was going to lead to the only present that mattered. 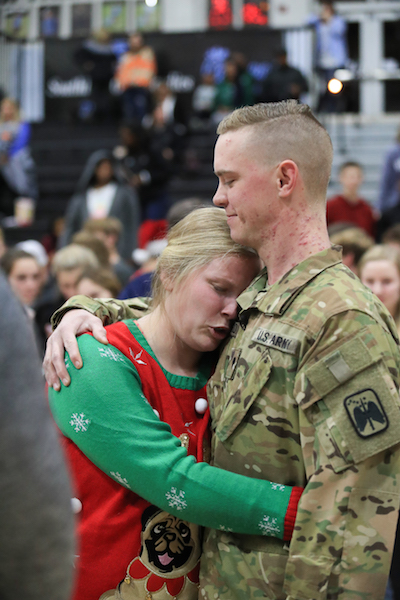 That was just a part of a special night of family reunions at Spain Park.

On the court, not only did Jaguars’ head coach Chris Laatsch square off against one of his sons as a coach for the first time when William Laatsch came to town as an assistant on the Panthers’ coaching staff, but Pelham head coach Joel Floyd also got to do what he has done for so long by coaching his son in the game.

Spain Park went on to pick up a 53-45 victory over Pelham to improve to 6-4 on the season. The Jags got 13 points from Braden DiClemente, including a 3-4 mark at the free throw line to help ice the game.

A 17-point third quarter, which saw the Jags outscore the Panthers by 11 points, was the difference in the game after a one-point halftime lead. In that quarter, Crawford had seven points.

For the game, Spain Park knocked down 11 of 14 free throws to help in the victory. Pelham was led by 15 points from Blake Floyd, while Kendan Maddox added 10 points.

But at the ended of the night, coaches and sons posed for pictures together at midcourt, while McQueen and Langford did the same in a game that meant much more than the score on the scoreboard.

Several perform well at Over the Mountain Duals

By ALEC ETHEREDGE | Sports Editor  PELHAM – It was a strong night for several county wrestlers and teams on Tuesday,... read more