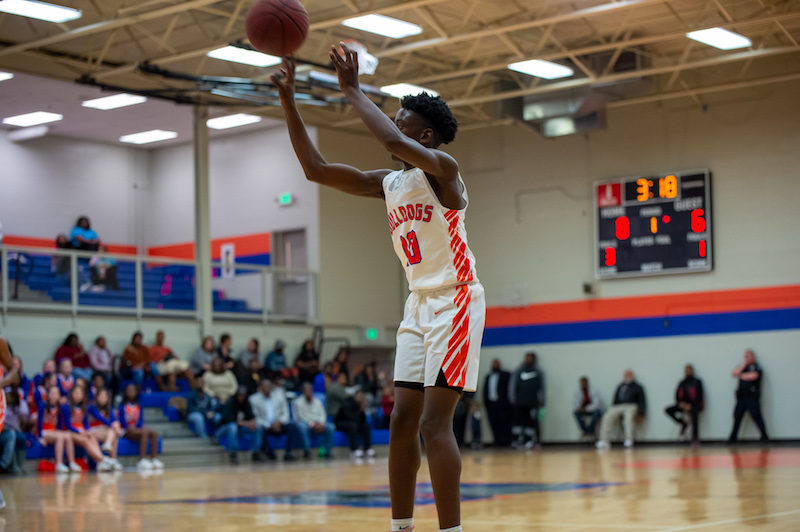 Montevallo took down Leeds on Thursday, Dec. 5, to finish the week with a 2-0 record in area play. (For the Reporter/Larry Dancy)

LEEDS – The Montevallo Bulldogs improved to 2-0 in area play on Thursday, Dec. 5, with a strong 58-34 victory on the road against Leeds behind three double-figure scorers.

In the opening quarter of the game, Montevallo was able to set the tone and take a lead that was going to be tough for the Greenwave to overcome with the way the Bulldogs played on both ends of the floor.

Offensively, Montevallo posted one of two 18-point quarters in the first period, as players like Jabrian Sullens, Jamarius Carter and Michael Jones instilled their will early.

But it was the defense that ended up allowing those 18 points to create some separation between the two teams. They forced 10 turnovers in the opening quarter of the game, which not only limited Leeds to just five points, but set the pace for the rest of the night.

During the first three quarters of action, Leeds failed to score more than eight points, but what Montevallo did in the second quarter to follow up an impressive first quarter created a large halftime lead.

The Bulldogs went on to limit the Greenwave to just four points in the period, and while Montevallo’s offense had its worst quarter of the game with just eight points, the Bulldogs had done enough to take a 26-9 lead into the half.

After making some adjustments at the break, Montevallo’s offense regained its composure and seemingly put the game away in the third quarter with another 18-point performance.

Defensively, the Bulldogs held Leeds to eight points, which allowed them to pull away for a 34-17 lead going into the final quarter.

In the fourth, Montevallo did what it needed to in order to put the game away with a 14-13 period.