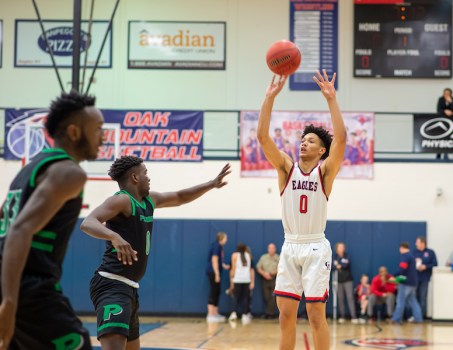 The Oak Mountain Eagles took advantage of a strong second quarter en route to a slim five-point win against county rival Pelham on Tuesday, Dec. 10. (For the Reporter/Larry Dancy) 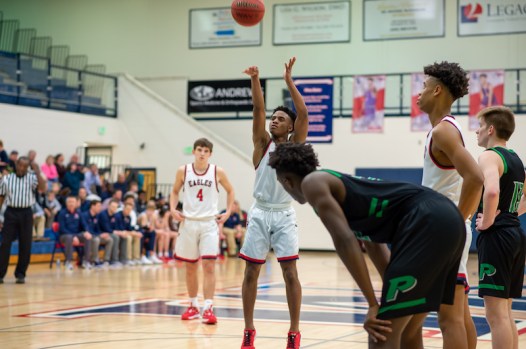 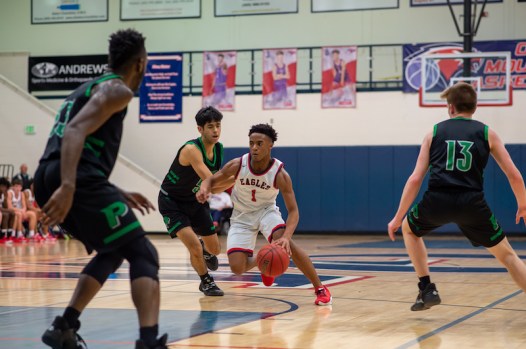 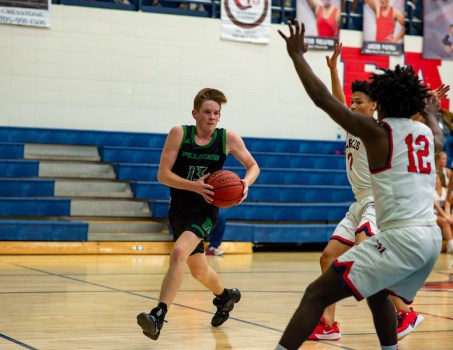 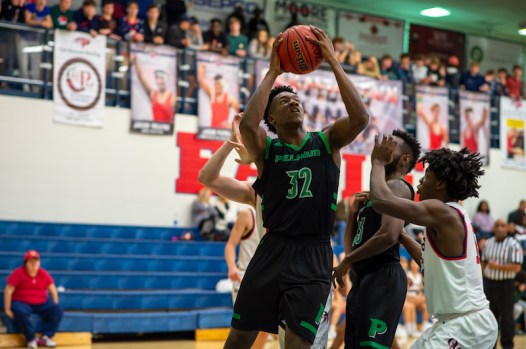 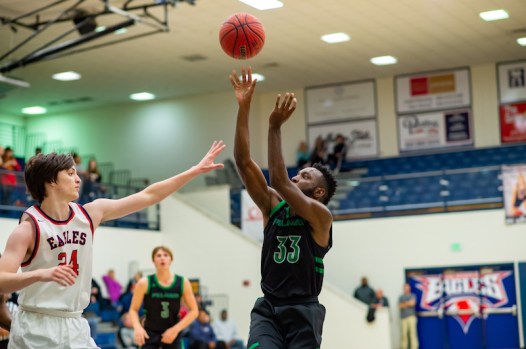 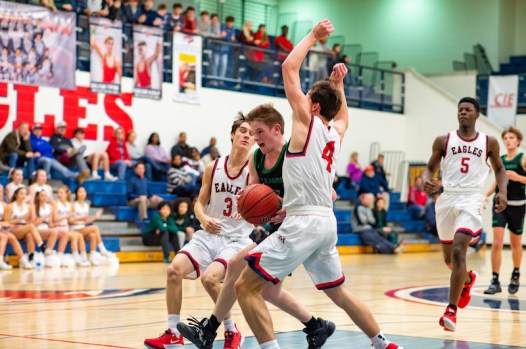 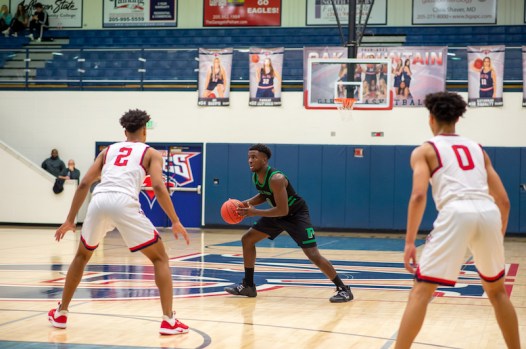 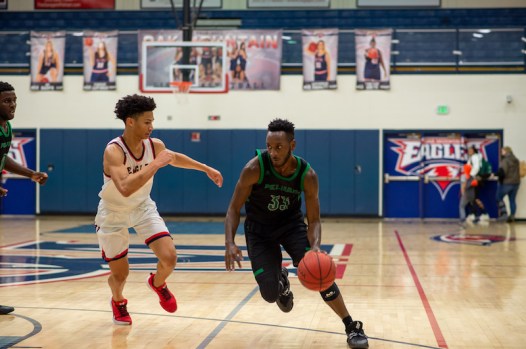 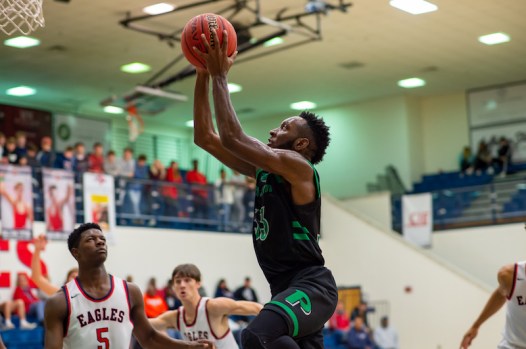 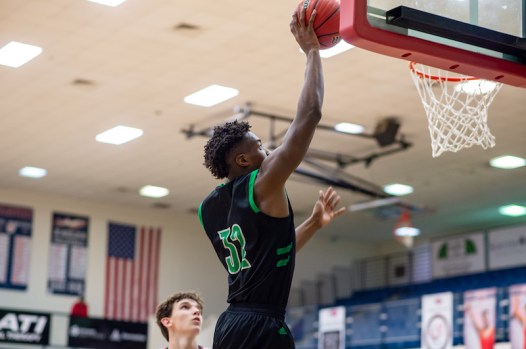 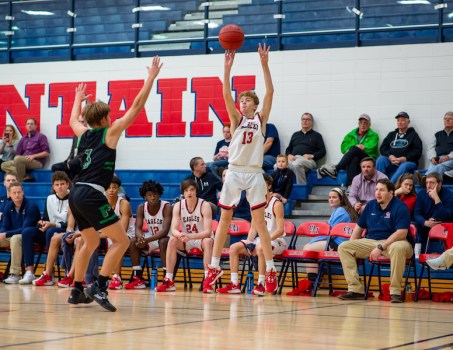 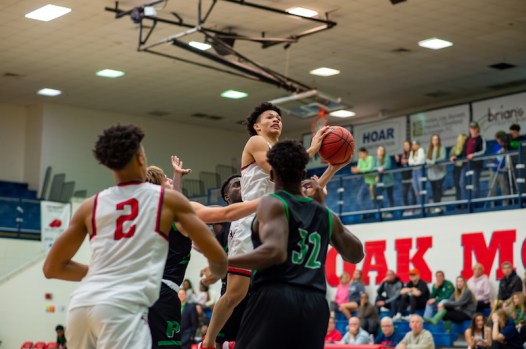 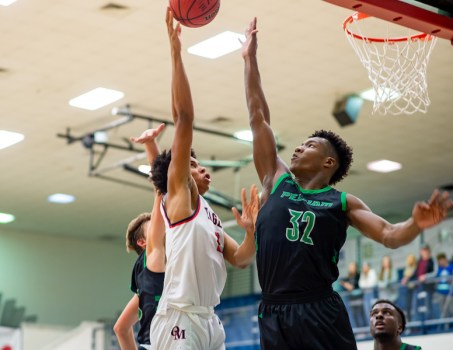 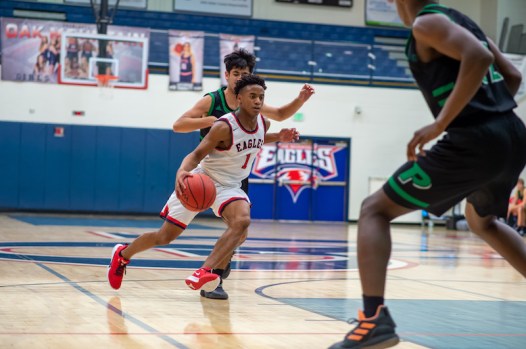 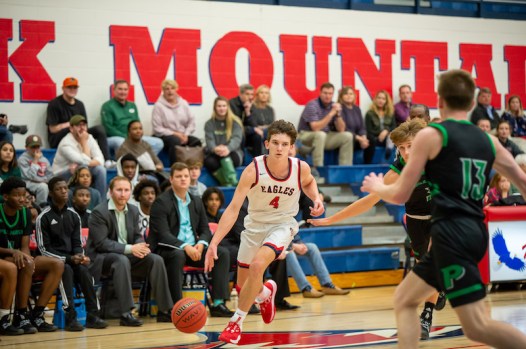 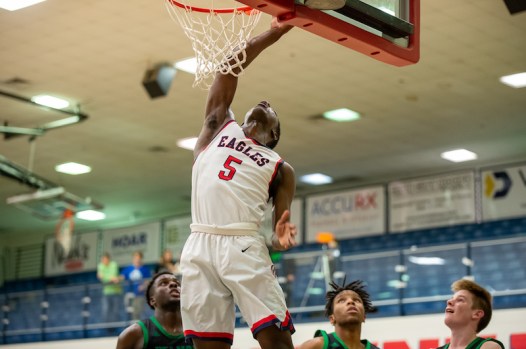 NORTH SHELBY – After a slow start in the opening quarter, Oak Mountain and Pelham combined to put together a tightly contested matchup on Tuesday, Dec. 10, in a rivalry matchup, but the Eagles took advantage of a 20-point second quarter to create the separation needed to pick up a 51-46 victory.

In the opening quarter, neither team could find much of an offensive rhythm, as the two combined to make just four field goals. But for Oak Mountain, two made 3-pointers were the difference in taking an early 7-5 advantage.

One of those made threes came from Zane Nelson, and it was just the start of a special half shooting the basketball.

After a quiet opening period on the offensive end, Nelson found his stroke in the second quarter and totaled more points by himself than the two had combined for in the first quarter.

He knocked down five 3-pointers on his own to post 15 of Oak Mountain’s 20 second-quarter points, bringing his first-half total to 18 points.

With his special performance, as well as a 3-pointer from Brady Dunn and a strong defensive performance that held Pelham to 10 points, the Eagles were able to take a 27-15 lead into the half.

But the Panthers had started to show flashes of their offense getting in a groove in the second quarter and that paid off in the third period.

Coming out of the locker room, Pelham not only got six points each from Kendan Maddox and Blake Floyd to help the offense post 14 points in the frame, but the defense made adjustments by holding Oak Mountain to just nine points in the quarter, but more importantly limiting Nelson to just one 3-pointer.

With that shift in momentum, Pelham had cut the deficit to seven points at 36-29 heading to the final quarter.

Now down by single digits at the start of the fourth, the Panthers had a chance to pull off the comeback win, and they came close to doing just that.

Pelham was able to get a quick three points to start the frame, and eventually cut the Oak Mountain lead down to two points. But the Panthers never could quite overcome the uphill battle from the start.

Thanks to two fourth-quarter 3-pointers and a couple of late free throws, the Eagles were able to take a three-point game with 12 seconds left and turn it into the five-point win.

Nelson finished the game with 25 points behind seven made 3-pointers and a 4-7 mark at the free throw line. Dunn added nine points on three made 3-pointers.

Pelham was led by 13 points from Floyd, while Maddox added 12 and Ray Gonzalez nine points.

Oak Mountain improved to 6-3 on the season with the win, while Pelham is now 6-4.