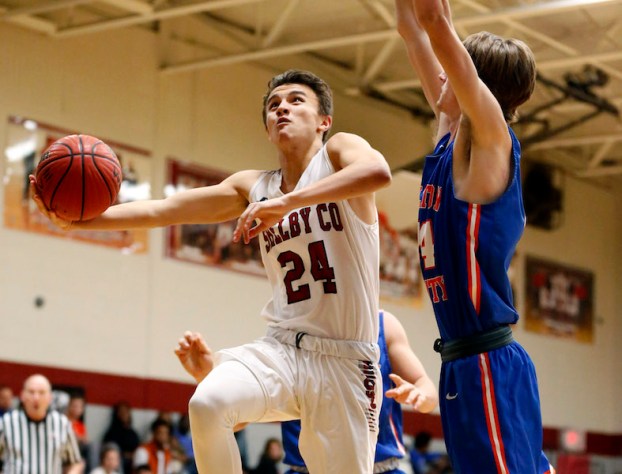 The Shelby County Wildcats saw both their boys and girls win area openers over Chilton County on Tuesday, Dec. 10. (For the Reporter/Brandon Sumrall)

COLUMBIANA – Area play tipped off on Tuesday, Dec. 10, for both the Shelby County Wildcats and Chilton County Tigers, as the Wildcats swept the first meeting of the season coming away with a 57-29 victory in the boys’ game, while the Shelby County girls defended their home court with a 73-23 win.

Varsity girls action proved to be all Wildcats from the get go as five consecutive points from Skye Knighten-Lilly lit a fire in Shelby County (5-2, 1-0) from the opening tip off. Seven points from Lilly and another 12 from Maggie West during the first period propelled the Wildcats to a 24-0 run on the Tigers to start the game. A basket from Tyonna Booker at the 1:23 mark of the first finally brought end to the Shelby County run, but the Wildcats ended the opening period with a commanding 24-3 lead.

The second period of the contest mirrored the first, as the Wildcats came out firing on all cylinders. A three from Haley Hope along with a basket for Nateley Whitney got things started for Shelby County. An 18-0 run by the Wildcats eventually came to an end on a three by Booker, which was followed by a pair of threes from Kelsey Cleckler that made it a 44-12 Wildcats’ lead at the half.

West kept things rolling for the Wildcats to start the second half, but Booker answered for Chilton with a pair from behind the arc.

Synia Underwood answered with another basket for the Tigers, but a basket from Aaliyah Cotton went on to ignite a 21-1 run for Shelby County that sent the game to the fourth with the Wildcats carrying a 71-21 lead.

A hot fourth period clock made short work of the final eight minutes, as a free throw from Maleah Hale for Shelby County along with a pair of free throws from Zoe Roberts of Chilton was all of the offense in the fourth, leading to the Wildcats closing out the 73-23 win.

West led the way for Shelby County with 25 points, eight rebounds, eight
steals and a pair of blocks. Booker led the Tigers with 13 points and two rebounds.

Varsity boys action was a much lower scoring affair, as ball control and defense was the theme of the night.

Shi Keem Laister and Caleb Acreman put the Tigers on the board early but that was answered by a run from Larz Balfanz of the Wildcats to swing the lead in their favor.

Shelby County took advantage of that, and eventually took an 11-9 lead heading to the second quarter.

The Wildcats were able to continue that strong play in the second quarter, as they eventually took a six-point lead. That was a steady throughout the rest of the first half, and while the Tigers cut it to two at one point, a buzzer beater from Noah Harper made it 22-18 heading into the break.

The strong 3-point shooting for the Wildcats continued into the second half, as Balfanz lit up the scoreboard up for Shelby County with three consecutive baskets from beyond the arc that would propelled the Wildcats to an 11-point lead, while the defense limited the Tigers to just five points in the period.

The Chilton shooting woes continued into the final period, while the Wildcats finished strong from 3-point range, as Straate started the period with a basket from behind the arc. Straate later added another three, which was then followed by another pair of threes from Noah Harper, as Shelby County pulled away for the 57-29 win over the Tigers.

Balfanz finished the night with 15 points, four rebounds and a pair of steals for Shelby County.