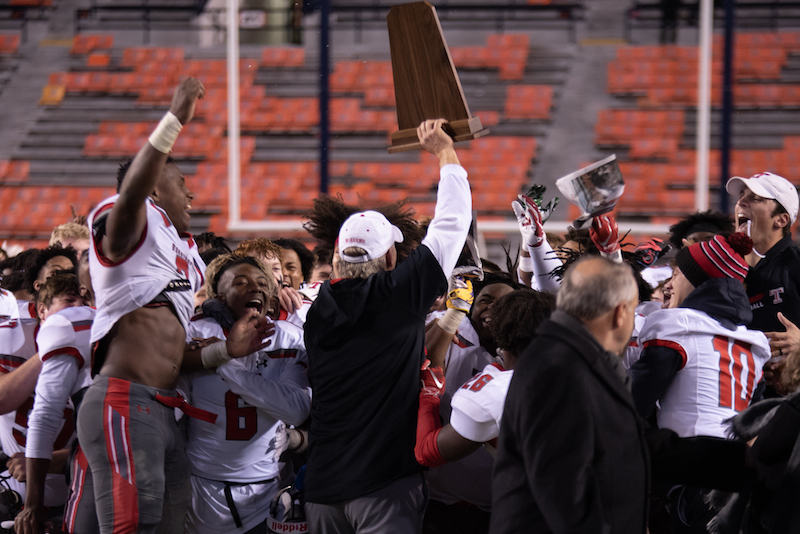 Not that they needed any more recognition following a historic season, but the 2019 state champion Thompson Warriors got just that when the USA Today Super 25 high school football poll was released on Monday, Dec. 9.

Sitting at No. 23 in the poll, the Warriors not only finished the season with their second state championship in school history, but as one of the 25 best teams in the country.

From where this team was at the end of the 2014 season at 0-10, to now having won a combined 35 games with just four losses over the last three years, it’s been a special revival to the program behind head coach Mark Freeman, his staff and the players.

Looking back to the end of the 2014 season, Thompson players didn’t know what was in store and there was some doubt in them with a culture that was much more relaxed.

But as soon as Freeman stepped into the building, the culture changed.

“I remember a few times my freshman year where I just didn’t want to go to workouts so I would stay home instead,” former linebacker Jalen Rayam said. “But the first day Freeman and his staff got in, the coaches told us ‘You aren’t missing workouts no matter what,’ and we just got in that habit.”

That culture quickly turned the program into a 5-5 team the next two seasons with close losses keeping them from being slightly better, but by Rayam’s senior season, he and his teammates saw the hard work pay off.

Thompson went on to beat Hoover for the first time in school history that year and advanced to the semifinals of the Class 7A playoffs.

While the culture changed during Freeman’s first year, the team saw what could happen with the work they put in during the 2017 season, which created a new belief—a belief that Thompson could win a state championship.

And the next year, the Warriors punched their ticket after beating the Buccaneers in the semifinals.

While they went on to lose 52-7 to Central-Phenix City in that game, they had taken the next step in continuing to build one of the best programs in the state.

Then, one year later, the Warriors got another shot. Despite losing a large portion of talent from the previous team, Thompson put in the work and believed in themselves.

The Warriors went on to beat Hoover twice in one year for the first time in school history, including a semifinal win, to advance to the state title game against Central-Phenix again.

This time around, the Warriors took the final step when they picked up a dominant 40-14 win over the Red Devils to claim their second championship in school history and first since 1982.

Now, they finish the season as the top team in the state and one of the best teams in the country. They’re now named alongside teams like St. John Bosco, St. Thomas Aquinas, Saint Louis, De La Salle and IMG Academy, who are also featured in the poll.

And even more impressive than that, the Warriors were ranked higher in the High School Football America poll, where they came in at No. 16.

In five short years, Thompson has gone from the depths of despair as a winless team, to one of the best football programs in America.