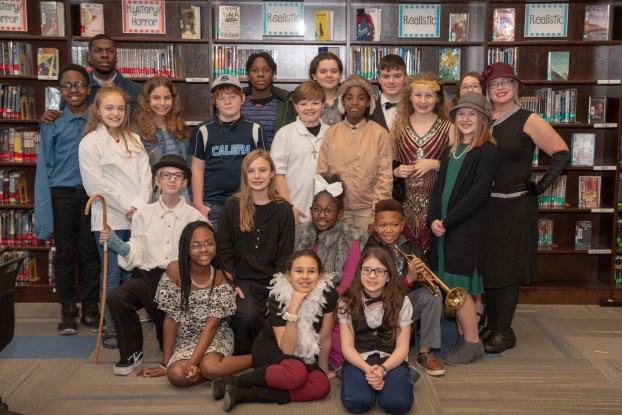 Calera Middle School students participated in a mock speakeasy on Wednesday, Dec. 11, and dressed up as historical figures from that time as a part of their studies focusing on the 1920s. (Reporter photo/Keith McCoy)

CALERA – Iconic celebrities and historical figures from the Roaring Twenties came back for one day only on Wednesday, Dec. 11, at Calera Middle School as students dressed up and embodied people from that time period.

Sixth grade social studies teachers Beth Cain and Byron Williams said the interactive assignment wrapped up their studies on the 1920s. Students were tasked with researching a person from that time, such as Georgia O’Keeffe, Zelda Fitzgerald, Duke Ellington, Louis Armstrong, Babe Ruth, Walt Disney and Josephine Baker, and then having conversations with their classmates as if they were that person during a mock speakeasy in the school’s library.

Throughout the day, students introduced themselves as their assigned person and had conversations with each other about their lives and accomplishments. Those who dressed up as their person received extra credit.

“With the mock speakeasy, we’re trying to mimic what they would have experienced back then,” Williams said. “It’s really just a way to make learning fun.”

By pretending they are that person, Cain said the students are able to connect with these historic figures on a more personal level. For example, a student who plays the trumpet, and was pretending to be Duke Ellington, graced his classmates with a musical selection on his trumpet.

Cain said some of her students were surprised by what they learned about some people, such as how many kids they had or how many times they’d been married.

“While I was learning more about her and reading about her, I felt like I knew her,” said student Kai Howard, who was Josephine Baker for the day.

Howard and her friends Penelope Burr, also known as Charlie Chaplain, and Abigail Cox, or Annie Oakley, said the assignment was easy because it was so much fun.

“It’s cool because we got to bring a modern twist to what’s already been done,” Burr said. Cox added that she loved getting to dress up as someone else for the day.

Cain said the mock speakeasy is something the sixth-grade social studies classes have done for the past two years. It’s been a hit with students and will likely continue in the years to come.

By GRAHAM BROOKS / Staff Writer PELHAM – Santa Claus is set to visit the city of Pelham on Christmas... read more