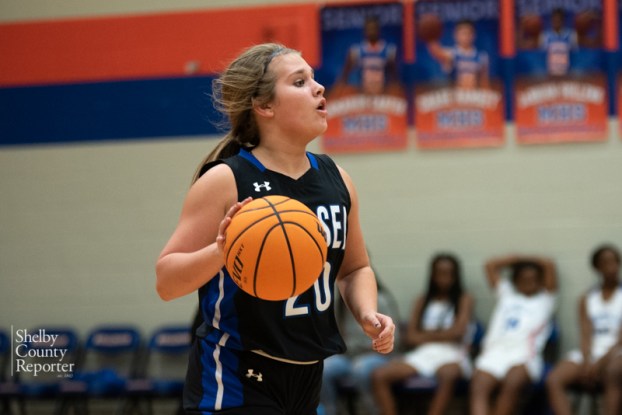 The Chelsea Hornets picked up a dominant road win against the Thompson Warriors on Thursday, Dec. 12. (Reporter photo/Keith McCoy)

ALABASTER – The Chelsea Hornets took their second consecutive road win of the week and have now won seven in a row after a convincing 59-20 win against the Thompson Warriors on Thursday, Dec 12.

The victory runs their record to 12-2 on the season as Jason Harlow’s group has two more games before they head to Spain Park for the Lady Jag Tournament starting Dec 19.

Both sides of the ball were on display for the Hornets Thursday night as their defense led to offense early and often against the Warriors. Chelsea forced 10 turnovers in the first quarter alone and jumped out to a 15-2 lead, as they found ways to score on the break and within their offensive sets.

Mackenzie Titus was unstoppable in the paint early on converting two and-1 opportunities and scoring 10 of the Hornets’ 25 points in the quarter.

Chelsea also got to the charity stripe 15 times making 11 of those attempts. The Hornets continued to pressure Thompson in the second quarter and scored the first nine points of the period to open a 34-7 lead.

Chelsea forced another eight turnovers and held the Warriors to just four points, while six different players sank shots for the Hornets in the quarter. Sydney Schwallie scored six points to lead Chelsea to a big 43-11 advantage at halftime.

The pace slowed down for both teams in the third quarter, but the Hornets still found ways to extend their lead. Senior Pressley Rains was a steady force for Chelsea, scoring four points in each of the first three quarters and scored off two Thompson turnovers to open the quarter.

Harlow looks to her as someone he can count on down the road.

“Pressley is a person we count on to step up in games like this,” Harlow said. “She’s the type of kid where her defense gets her offense going and when her offense gets going she can score in bunches.”

With a 57-14 lead after the third quarter, Chelsea milked the running clock and cruised the rest of the way. Thompson’s Zyon Gaiters scored four of her team-high seven points in the fourth. Rains’ 12 points ended up leading the Hornets in scoring, as Titus’ 10 and Ellen Fleming’s nine points rounded out the evening.