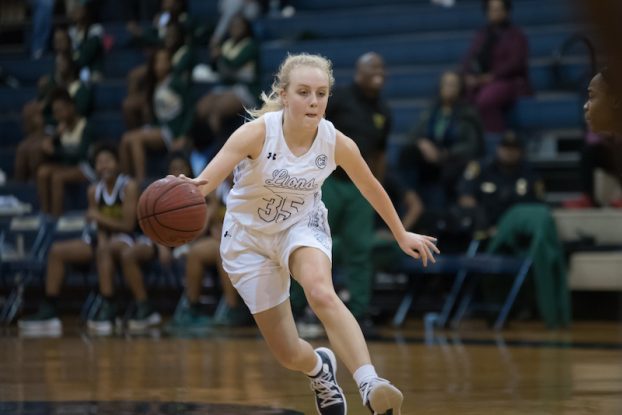 Maddie Vaughn, above, posted 15 points to help lead Briarwood to a strong win against Calera. (File)

Briarwood girls improve to 6-1 with win over Calera

NORTH SHELBY – The Briarwood Lions continued to impress early on in the 2019 season and protected their home court against the Calera Eagles on Friday, Dec 13, with a 43-27 win that saw the Lions build a big lead early, before sailing to the end.

“I’m so proud of them, we tried to put a little pressure on them early and it worked out for us,” Briarwood head coach Lorie Kerley said. “We weren’t shooting the ball great in the first half, but we were able to get some easy baskets around the paint. We had two really tough games with Calera last year so we were looking forward to this one.”

Briarwood (6-1) didn’t make a basket until four minutes into the game, but made their living at the free throw line often afterward. The Lions hit five of six attempts in the first quarter and went 12-14 for the half equaling Calera’s entire offensive output in that same span.

“That was one of our biggest weaknesses last year, was free throws,” Kerley said. “That was something we really focused on this summer and the preseason, we wanted to improve our percentage as one of our team goals this year, but this is by far our best shooting night of the season so the hard work is paying off.”

Down 8-6 late in the opening quarter, Briarwood scored 16 straight on a run that lasted well into the second period. The Lions started to get hot from the outside as well and capped the run with two threes from Bennett Shaw and Maddie Vaughn.

Shaw scored all seven of her points in the quarter to lead the team, but Vaughn was just heating up. Up 27-12, Briarwood ratcheted the defensive pressure up a notch pressing after made baskets.

The Eagles, unable to set up their offense, found themselves driving into the paint or forcing long shots. The Eagles got to the line, but had a very tough night from the charity stripe, as Briarwood’s arena dimensions make it difficult for shooters unaccustomed to the facility.

Vaughn continued to light it up, hitting three more from beyond the arc in a slow-moving second half that saw the Lions maintain their double-digit lead throughout.

“She’s been our most consistent outside shooter. She struggled last year, but she’s really gotten in the gym and worked hard,” Kerley said. “I’m really proud of how she controlled our offense, she didn’t try to play too fast, slowed things down saw the floor more and I think tonight was her best game of the year.”

Vaughn went on to lead all scorers with 15 points. She didn’t hit a free throw, but her teammates ended 15 of 21 from the line on the night.

Treasure Davis and Kaylen Moultrie scored 14 of Calera’s 16 second half points and led the Eagles with nine and ten points, respectively.

By SETH HAGAN | Special to the Reporter NORTH SHELBY –When the Calera Eagles traveled to face the undefeated Briarwood... read more