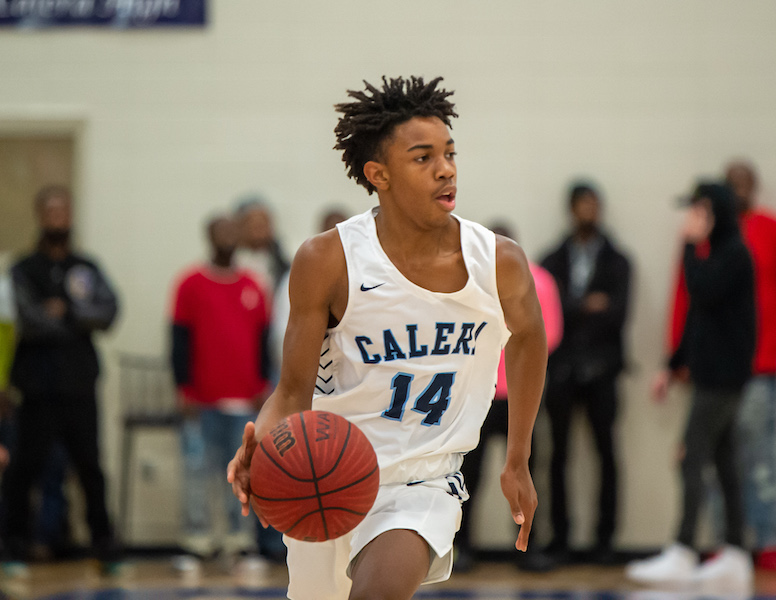 The Calera Eagles took down undefeated Briarwood on Friday, Dec. 13, thanks to a balanced attack. (File)

NORTH SHELBY –When the Calera Eagles traveled to face the undefeated Briarwood Lions everyone in the arena expected an entertaining matchup, but if you blinked you may have missed the entire game.

The beasts of the field and the birds of the air provided a high-flying showcase where it was a shame someone had to lose, yet in the end, Calera prevailed 70-64 giving head coach George Drake a signature win in his second full game back on the bench.

Drake’s son, Jaxon, has dealt with Moebius Syndrome, a rare neurological condition that causes facial paralysis, since birth with his father by his side through the entire process.

Briarwood had a prayer for Jaxon with the teams gathered at center court before the game and it was a moment Drake will always appreciate.

“I’ve got the ultimate respect for coach (Bobby) Kerley. He’s a standup guy and he’s been so supportive during this process,” Drake said. “Just to know that we have that community in not only Calera or Shelby County but in the state so that was big time.”

The Eagles came out with a lot of intensity to start and led by as many as eight in the first quarter to the surprise of a packed student section. They attacked the basket relentlessly and Paris Whatley had a monster opening quarter, scoring 11 points in the first six minutes.

“Paris does a heck of a job night in and night out, he’s our senior captain and it shows,” Drake said. “It doesn’t always show up on the stat sheet, but he gets his hands on the ball a lot, has a lot of energy and effort and definitely anchors us.”

Whatley found himself in foul trouble, and the Lions regained their footing and closed the lead to 21-16 by the end of the first.

Landon Nuyt and Hayden Lamey had five points each and both continued to play well in the second quarter.

Down 26-20 early in the period, both hit threes, while Nuyt hit two, including a four-point play, as the Lions outscored Calera 20-8 the rest of the way.

The Eagles pressed after made baskets, but Briarwood used it to their advantage getting in the open floor and finding shooters off the drive. Coach Drake knew his team needed to adjust.

“Coming in we knew this team was very well coached and their team is packed full of shooters,” said Drake. “In that second half we just told our guys to go out there and make sure we know our personnel and understand we have to close out to those guys quick because they can fill it up.”

The Eagles surged again quickly out of the break, as all five players scored on an 11-2 run to take the lead back at 47-42. From there, the pace of the game slowed and, after hitting five first half threes, Briarwood went cold from the outside.

Both teams traded baskets well into the fourth quarter with the Lions drawing within a possession only for Calera to extend the lead again.

Keyshawn Hayes was big in Whatley’s absence, scoring 11 points with impressive outside shooting. Whatley returned in the fourth quarter and Briarwood’s struggles continued from beyond the arc.

The Lions got in the bonus early as well, but only converted three of their five one-and-one attempts. Calera, on the other hand, was focused and poised at the line in a raucous environment and hit 11 of its 14 free throws in the final quarter.

Xzayvion Childress and Derrick Edwards were big late as well, scoring 15 of their 17 points in the second half.

“I’ve got a very resilient group,” Drake said. “We didn’t play great our last time out so to bounce back two days later against a great team like Briarwood is that just shows the kind of fight this team has.”

Whatley scored four in the fourth, including an easy layup after the Eagles forced a big turnover to equal their biggest lead of the night at 67-59. Calera forced 17 turnovers, while only committing 10 themselves.

Nuyt finally connected from long range with 47 seconds left, but after the Lions got a stop on defense, Edwards stole a pass on their next possession and sank both free throws to seal the upset for the Eagles.

Whatley’s 15 led the Eagles, who had two other double-digit scorers with Hayes’ 11 and Edwards’ 10. Isaiah Green also added nine points for Calera. Nuyt led all scorers with 19, while Lamey ended with 13.