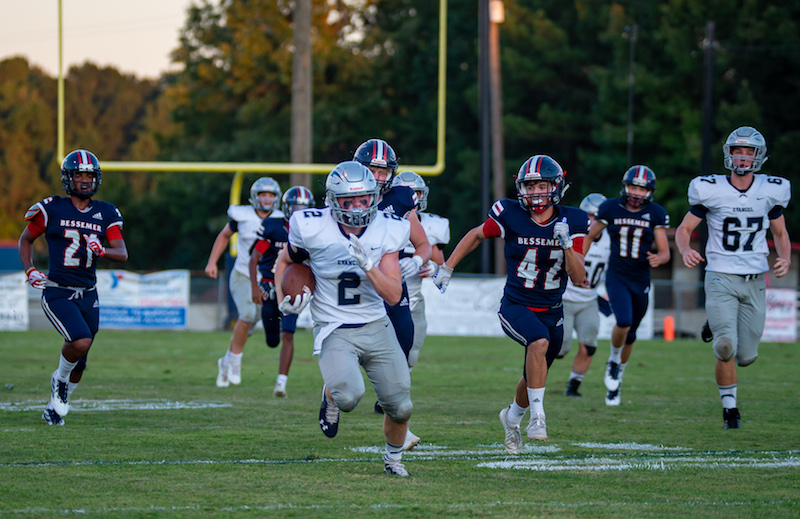 Evangel's Will Ferrell was one of the best local players throughout the 2019 football season. (Reporter photo/Keith McCoy)

Now that the 2019 football season has come to a close, it’s time to look at the special players that made a difference on the field during the year with our AISA-ACSC All-County football team.

Quarterback: Tyler Henderson, senior, Evangel. One of the best quarterbacks in the county this year, Henderson finished with 2,912 passing yards and 46 touchdowns on 151-of-227 passing. He also earned the MVP of the national championship game.

Running back: Noah Shears, senior, Evangel. Shears did just about everything on offense for the Lightning this year. He finished as the team’s leading rusher with 606 yards and eight touchdowns, while also totaling 130 receiving yards with two more touchdowns.

Receiver: Will Ferrell, junior, Evangel. One of the county’s best athletes, Ferrell finished second in receiving for the Lightning with 1,056 yards and 15 touchdowns on 73 catches, while also adding 175 rushing yards with an additional touchdown.

Offensive line: Jacob Jeffers, senior, Evangel. Jeffers led Evangel and was one of the best offensive linemen in the county this season thanks to his 43 pancake blocks in 12 games played.

Offensive line: Jared Waren, junior, Evangel. Warren played in just eight games, but established himself as a force with 13 pancake blocks in that short period of time. He’ll be a leader on next year’s line.

Defensive line: Justus Adams, sophomore, Cornerstone. Adams put together a remarkable sophomore season with a team-high 98 tackles, including 28 for loss and three sacks.

Defensive line: Jahmad Quillman, senior, Evangel. With 14 tackles for loss and five sacks, Quillman was a defensive force for the Lightning. He totaled 74 tackles during his final season.

Defensive line: Daniel Viles, junior, Evangel. Viles only had 40 tackles this season, but close to half of those went for loss, as he posted 18 tackles for loss and eight sacks.

Linebacker: Zackery Townley, senior, Cornerstone. Townley finished second on Cornerstone’s team in tackles and was a force at preventing big plays when he got the chance.

Linebacker: Will Parker, senior, Evangel. Parker led Evangel in tackles this season with 76, including 17 for loss and a team-high 15 sacks. He was one of the team’s best players on that side of the ball this year.

Linebacker: Cannan Mann, senior, Evangel. Mann was used all over the field for the Lightning this year on both sides of the ball. Defensively, he totaled 39 tackles, six tackles for loss and four sacks to play a key role.

Defensive back: Bryant Talbert, senior, Cornerstone. Talbert was a strong player on the backend of Cornerstone’s defense this year with three interceptions and a fumble recovery.

Defensive back: Yura Gothard, senior, Evangel. Gothard totaled 59 tackles this season, including 13 tackles for loss and one sack, while also adding an interception and two fumble recoveries. He flew all over the field.

Kicker: Jace Bailey, senior, Cornerstone. Bailey was one of the county’s best kickers this season and more than deserving of a spot on the All-County team.