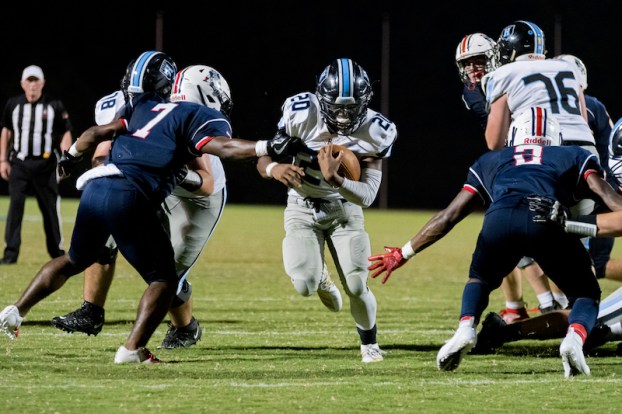 Helena's Marquis Johnson was the county's leading rusher during the 2019 season, which earned him a spot on the All-County first team. (For the Reporter/Jeremy Raines)

With five playoff teams, two semifinal teams, a state champion and several of the best players in the state, the 2019 football season was one many won’t soon forget.

A big reason for the stellar play and the unbelievable numbers posted this season was thanks to hard work and dedication from so many. Several of those players are honored below on the 2019 All-County football team, which features the most consistent level of talent the county has seen in several years.

Quarterback: Sawyer Pate, senior, Thompson. The MVP of the Class 7A State Championship game, Pate finished the season with 3,125 passing yards and 41 touchdowns. He completed 226 of his 306 passes with just five interceptions. He’s now 27th on the all-time passing list for most yards in a season in the state’s history and 12th for most touchdown passes in a season. He led the Warriors to their first state championship since 1982 and second in school history. Those numbers were more than enough to make him this year’s county player of the year.

Running back: Marquis Johnson, junior, Helena. Easily one of the best running backs in the state, Johnson totaled 1,478 rushing yards and 26 rushing touchdowns this season on 207 carries. He added a 50-yard touchdown catch as well.

Running back: Deon Gilliland, senior, Montevallo. The county’s second leading rusher this season, Gilliland rushed for 1,125 yards and 16 touchdowns on just 138 carries, while adding 16 catches for 153 yards and a touchdown. He also posted 447 kickoff return yards with two touchdowns.

Offensive line: Trent Howard, senior, Briarwood. Now a commit to Clemson, Howard had a remarkable career at Briarwood and posted 38 pancake blocks with no sacks given up this year.

Offensive line: Seaburn Hines, junior, Helena. Still a year to play, Hines has been one of the best linemen in the county the last two years. This year he graded at 91 percent with 46 pancake blocks.

Offensive line: J.T. Pennington, junior, Shelby County. Maybe the best lineman in the state that nobody is talking about, Pennington is a blocking tight end that posted a jaw-dropping 65 pancake blocks in just six games.

Offensive line: Drew Padgett, senior, Oak Mountain. Padgett gave up no sacks this season and was a great protector in a difficult option attack to block for.

Tight end: Jacob Jenkins, senior, Spain Park. Not just a trustworthy blocker, but a solid receiver, Jenkins was a go-to target for Harrison Barker with 612 yards and three touchdowns on 42 receptions.

Receiver: Mike Pettway, senior, Thompson. The county’s leader in receiving yards, Pettway finished the season with 1,154 yards and 16 touchdowns on 53 receptions. Consistently, he posted 1,156 yards the year before to finish his career with 2,310 yards.

Receiver: Jamarius Carter, senior, Montevallo. Finishing second in the county with 1,031 yards and 15 touchdowns on 49 receptions, Carter followed through on what was expected to be a breakout year.

Receiver: J.J. Evans, senior, Montevallo. Despite missing a couple games with injury this season and having to take over as the quarterback at times, the Auburn commit still posted 755 receiving yards and eight touchdowns despite being double covered most of the season.

Receiver: Michael Gibbs, senior, Chelsea. In a run-first offense, Gibbs was able to finish the season with 618 receiving yards and six touchdowns on 38 receptions. He also added 135 rushing yards and four touchdowns on the ground.

Athlete: Luke Prewett, senior, Briarwood. Prewett did a little bit of everything for the Lions this year, posting 950 rushing yards and 10 touchdowns on the ground, 238 receiving yards and a touchdown through the air and 270 kick return yards with a touchdown despite missing three games.

Defensive line: Jayson Jones, senior, Calera. Double and triple teamed on the line all season, teams stayed away from the Alabama commit, yet he still totaled 15 tackles for loss and seven sacks with 52 total tackles.

Defensive line: Damion Ugbo, senior, Thompson. One of the best at getting in the backfield this year, Ugbo finished the season with 69 tackles, including three sacks and 18 tackles for loss.

Linebacker: Jeremiah Alexander, sophomore, Thompson. Arguably the best linebacker in the state, and rated as one of the best in the country, Alexander posted 118 tackles this year with a remarkable 25 tackles for loss and 8.5 sacks. He also recovered two fumbles and had two interceptions.

Linebacker: Tyler Waugh, junior, Briarwood. Seemingly in on every tackle for the Lions, Waugh totaled 163 tackles this year with seven tackles for loss and six sacks. He also had four recovered fumbles and a pick-six.

Linebacker: Parker Hutson, junior, Briarwood. Hutson wasn’t too far behind his teammate with 141 tackles this season, including seven for loss and three sacks.

Defensive back: Ja’Vone Williams, senior, Thompson. The county’s leader in interceptions with eight, Williams was one of the most clutch defenders in the state this year. He also added 56 tackles and three tackles for loss.

Defensive back: Gavin Shipman, junior, Thompson. Shipman was also a lockdown defensive back for the Warriors this season, finishing second in the county with five interceptions. He added 50 tackles and four tackles for loss.

Defensive back: Chase Schwender, junior, Oak Mountain. With 84 tackles in the secondary, Schwender didn’t let much by him. He also had two interceptions and 2.5 tackles for loss.

Defensive back: Zach Goodwin, senior, Helena. One of many great defensive backs for the Huskies, Goodwin had 82 tackles as well as three interceptions and three pass breakups.

Kicker: Evan McGuire, senior, Thompson. With close to 90 percent of his kickoffs ending in touchbacks, McGuire was a big field position kicker. He was also a strong punter with 15 punts inside the 20. Field goal wise, he made eight of his nine attempts with a long of 44 yards and made 65 of 72 PATs.

Kicker: Cooper Neal, senior, Chelsea. Neal made 37 of his 38 PATs this season and totaled five field goals with a long of 49 yards.

Running back: Collier Blair, junior, Chelsea. Blair totaled 1,048 rushing yards with 12 touchdowns on 200 attempts this season, while adding 287 receiving yards and three touchdowns through the air.

Running back: Gabe Gamble, sophomore, Pelham. With 1,051 yards and seven touchdowns on just 153 carries, Gamble stepped up as the backup this year to set a bright future for the Panthers.

Offensive line: Rankin Allen, senior, Montevallo. Montevallo’s best lineman, he blocked for one of the most productive offenses in the state.

Offensive line: Martaviun Lawson, senior, Vincent. Lawson graded over 90 percent this year and finished with 20 knockdowns. He also totaled 68 tackles, including 11 for loss and eight sacks at defensive end.

Offensive line: Caleb Newell, sophomore, Pelham. A leader already as a sophomore, Newell graded 90 percent for the Panthers this season.

Receiver: Blake McKenna, senior, Briarwood. With 678 receiving yards and eight touchdowns on 37 receptions, McKenna was the go-to target for freshman quarterback Chris Vizzina. He made several clutch catches and was sure-handed.

Receiver: J.B. Mitchell, junior, Thompson. Mitchell became a major target in the second half of the season, totaling 677 yards and eight touchdowns on 53 receptions. He caught two touchdowns in the state championship game.

Athlete: Tae McGregor, junior, Vincent. McGregor did everything this year. He totaled 790 rushing yards and eight touchdowns on just 75 carries, while also adding 256 receiving yards and seven touchdowns on just 15 receptions. In addition to that, he had three kick returns for touchdowns, had six tackles for loss and two sacks, posted three interceptions, had two defensive touchdowns and had an average of 35 yards per punt.

Linebacker: Braden Marlowe, sophomore, Pelham. Marlowe was unreal as a sophomore with 89 tackles, including eight for loss and four sacks.

Linebacker: Will Pfaffman, senior, Oak Mountain. With 95 total tackles, including seven for loss and two sacks, Pfaffman had a strong season coming off ACL surgery.

Linebacker: Owen May, senior, Thompson. May posted 11 tackles for loss and 3.5 sacks this season with 69 total tackles.

Defensive back: Tony Mitchell, freshman, Thompson. Just a freshman, Mitchell totaled 67 tackles, had five tackles for loss, an interception and a fumble recovery.

Defensive back: Cody Ferguson, senior, Pelham. Ferguson broke up three passes and had two interceptions this season with 31 total tackles.

Defensive back: Alastair Harris, junior, Briarwood. An under-the-radar DB that posted 62 tackles, 11 pass breakups, six tackles for loss, one sack and one interception.

Kicker: Drake Tabor, junior, Spain Park. Finished the season 36-of-37 on extra points and made four of six field goals with a long of 42 yards. He also had 34 touchbacks on 49 kickoffs.

Kicker: Logan Maloney, senior, Helena. Maloney made 44 of his 49 PATs, while also going 6-of-7 on field goals.

By EMILY SPARACINO / Staff Writer COLUMBIANA – The Shelby County Chamber has changed the date of its fifth-annual Boots... read more