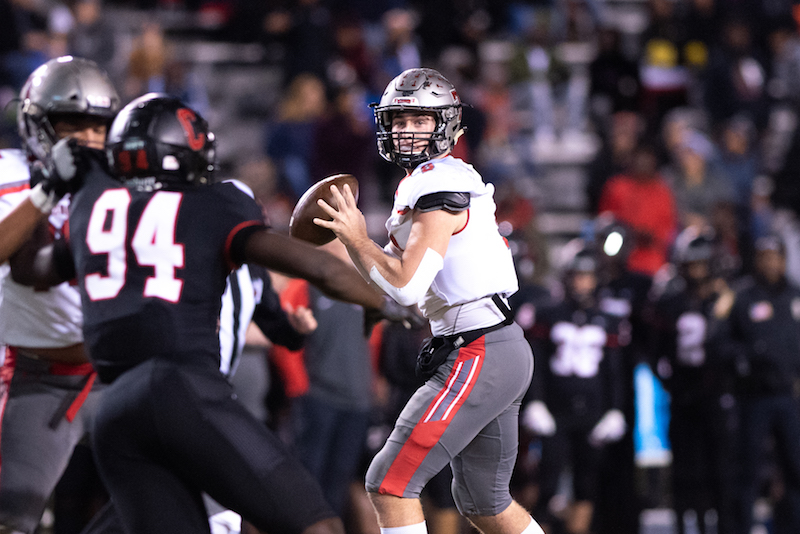 Thompson quarterback Sawyer Pate earned the 2019 Shelby County Player of the Year award after throwing for more than 3,000 yards and 40 touchdowns to lead the Warriors to their second state championship in school history. (File)

When Taulia Tagovailoa’s Thompson career came to a close at the end of the 2018 football season, many didn’t know what to expect from his replacement in senior quarterback Sawyer Pate.

Being forced to replace a player that threw for more than 7,000 yards in two years at Thompson, Pate entered his senior season as a first-time starter with big shoes to fill.

Not only did he bust through the seams of those shoes, he did something only one other quarterback in school history had done by leading the Warriors to their second state championship with a 40-14 win over Central-Phenix City.

Coming into the season, Pate had many doubters that hadn’t seen the work he put in both on and off the field to become exactly what the Warriors needed. Not many people expected him to be able to fill the shoes of Tagovailoa and not many expected Thompson to win 10-plus games for the third year in a row.

But Pate used that as motivation. From the end of last season and throughout summer workouts, that became motivation to prove every doubter wrong.

And then came time to put on the shoulder pads and step onto the field for his first game as a starter. On Friday, Aug. 24, against Davidson, Pate went out and totaled 217 passing yards and three touchdowns on 8-of-13 passing to lead Thompson to a dominant 40-14 victory.

That was in just one half of play, as he helped the Warriors post 30 points in the first quarter of the game with all three of his touchdown passes coming in that opening period of his career.

At that point, it became clear. This kid was good.

With an entirely new offensive line blocking for him, Pate never looked uncomfortable throughout the year. If he was going to get sacked, he let it happen. There never was a panic button hit or a bad decision because of the pressure that was there.

He trusted his teammates and knew the offensive line would get better and his standout playmakers on the edge could make up a ton of yards in a hurry.

That trust and his decision making led to Pate being one of the most efficient quarterbacks in the state this year.

In one season, he threw for 3,125 yards and 41 touchdowns on 226-of-306 passing with just five interceptions. That’s a completion percentage of 74.5 for the entire season.

It’s all remarkable and it’s all why Pate has been named the 2019 Shelby County Player of the Year.

Outside of that, Spain Park quarterback Harrison Barker was a strong contender, as were Thompson receiver Mike Pettway and many others who put up remarkable numbers throughout the season.

But Pate’s season in the toughest 7A classification was second to none. From day one, he set out on a mission to bring his hometown a championship. And at the end of it all, he can look back and say, mission accomplished.