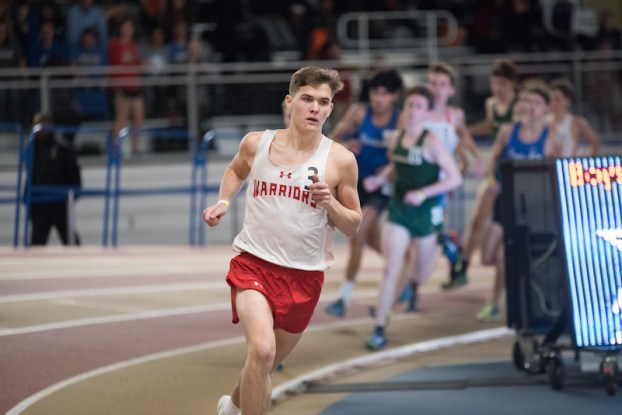 The indoor track and field season is off and running following the 2019 Holiday Invitational held at the Birmingham CrossPlex on Saturday, Dec. 14, featuring several local champions in individual events. (Reporter photo/Keith McCoy)

BIRMINGHAM – The indoor track and field season is off and running following the 2019 Holiday Invitational held at the Birmingham CrossPlex on Saturday, Dec. 14, featuring several local champions in individual events.

Outside of those four first-place finishes, the county had several other top-five finishers at the event, and the Thompson Warriors put together one of the best efforts of the day.

Sam Reynolds and Ryan Peppins both had strong showings in the 60-meter dash finishing third and fifth, respectively. Reynolds finished the race in 7.02 seconds, while Peppins finished with a time of 7.11 seconds.

Behind Hurst in the high jump, Gavin Gray had a strong showing with a height of 6 feet, which was good enough for a finish of fifth. In the pole vault finals, Blake Ellis was able to claim fourth with a height of 13 feet, 6 inches.

For Oak Mountain, the Eagles claimed top-five finishes in the boys’ 4X200-meter relay and shot put. The 4X200-meter relay team finished fifth with a time of 1:35.63, while Harrison Dimick claimed third in the shot put with a distance of 49 feet, 1 inch.

In the 6A classification, Pelham had a strong showing thanks to Gaeton Rellah, Erin Long and Adia Hasty individually, as well as the 4X400-mter girls’ relay team.

Long finished in the top six of three different events, claiming third in the high jump with a height of 5 feet, fifth in the triple jump with a distance of 34 feet, 2.75 inches and sixth in the 60-meter hurdles with a time of 9.80 seconds.

Briarwood also added a top-five finisher in the 1A-5A portion of the race thanks to Jake Nunn’s fifth-place finish in the 60-meter dash with a time of 7.21 seconds.

By ALEC ETHEREDGE | Sports Editor CHELSEA – On a collision course to meet in the finals of the 2019... read more