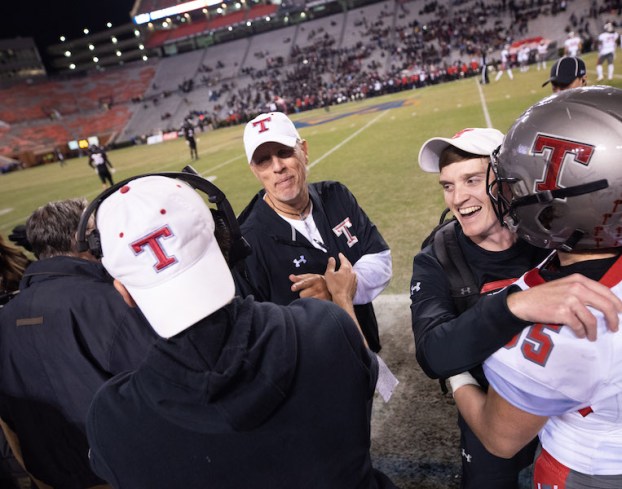 Thompson head football coach Mark Freeman has been named the 2019 Shelby County Coach of the Year after leading the Warriors to their first title in 37 years. (Reporter photo/Keith McCoy)

With a state champion, two semifinalists and five total playoff teams, 2019 marked a historic and special football season for the Shelby County area.

And while there is plenty of praise to pass around to players and communities, it was arguably one of the best cumulative coaching efforts the county has ever seen.

First-year Briarwood head coach Matthew Forester led his team to the semifinals of the playoffs, Helena head coach Richie Busby helped the Huskies to their most historic season in school history in just his second year, Chelsea head coach Dustin Goodwin also put together the best Chelsea team in a few years in his second season, Montevallo head coach Brandon Wilcox led his team through many injuries to again find the playoffs, and Pelham head coach Tom Causey brought his team out of a 0-6 hole to win three in a row despite an entirely new team this year.

Looking at the adjustments each made and how much their teams improved not only from last year to this year, but throughout this season, is a testament that each made a difference in their team.

But there wasn’t a coach that was more evident in than Thompson head coach Mark Freeman. While Forester and Busby pushed hard for the award after spectacular seasons leading their team, it was impossible to ignore what Freeman was not only able to do in his fifth year at Thompson, but over the last five years as head coach of the Warriors, earning him the 2019 Shelby County Coach of the Year award.

It marks the third year in a row that Freeman has won the award, and while this year was the closest of the last three with remarkable coaches across the county, his ability to not only prepare his players but his coaching staff for the season was elite.

Following last year’s 52-7 loss in the state championship game, Thompson lost the majority of its production defensively, almost its entire offensive line and All-State quarterback Taulia Tagovailoa, who was one of the best in the state’s history.

Going into this season, many expected Thompson to still compete and be a good football team, but it was hard pressed to find many that believed the Warriors would win the state championship.

Hoover and even Hewitt-Trussville were considered the favorites ahead of the season, but Freeman, his staff and the players were ready to prove that wrong.

Freeman said before the season that this was a year he and his staff new was coming. One with a bunch of young players on defense and some new starters on offense. Ahead of the season, he didn’t really know what to expect, but he knew his coaching staff was working hard to coach the players up.

On several occasions throughout the season, the players credited the success they were having to the work the coaching staff was putting. They saw that at practice and off the field, and that made the players want to work harder, which starts at the top with Freeman.

That desire to work along with the hunger to prove that they could redeem the difficult state championship loss despite the departure of several stars fueled Thompson all season.

While the defense and offensive line made some young mistakes at times, they weathered the storm and got better throughout the season, ultimately becoming dominant at times later in the year.

With that consistent growth and a quarterback in Sawyer Pate that went from sitting behind Tagovailoa to an All-State caliber player, Thompson put together a remarkable season.

This time around, against Central-Phenix City again, Thompson used its growth, used everything the coaches had taught and used its motivation to pull off a dominant 40-14 victory to claim their second championship in school history and first since 1982.

That win marked Freeman’s seventh state championship as a head coach in Alabama, putting him in a tie for fourth on the all-time list in the state for most championships.

From the end of last season to the end of this season, we saw a transformation from a team that wasn’t ready to a team that has made Thompson the team to beat.

By ALEC ETHEREDGE | Sports Editor  BIRMINGHAM – The indoor track and field season is off and running following the... read more