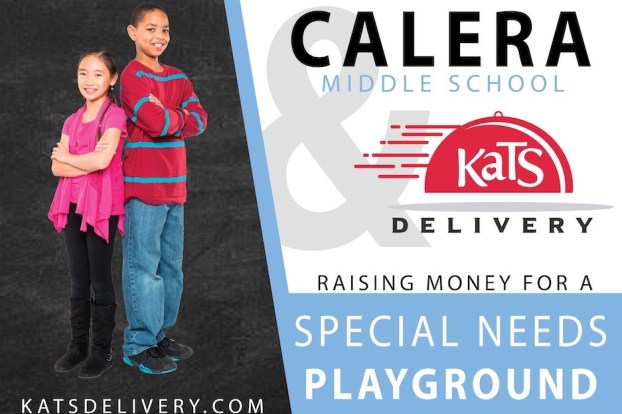 Kat’s Delivery, a grocery, catering and restaurant delivery service based in Alabaster, is helping the school raise money by encouraging customers to round up the price of their order to the nearest dollar and donating the extra change to the school. The fundraiser is open to customers who use the company’s on-demand food service.

Customers can order food from more than 100 restaurants in greater Birmingham area, which includes Alabaster, Calera, Helena, Chelsea, Montevallo, Pelham and Riverchase. Maurice Mercer, owner of Kat’s Dilvery, said the business will match the first $100 raised, and is asking other businesses to also match funds. The fundraiser will end on Dec. 31.

Calera Middle School principal Desaree Jackson said the money will be used to purchase picnic tables, outside furniture and additional sensory playground equipment. The school needs to raise about $5,000 to complete the special needs playground, which serves about 13 students at the school.

Adding outside picnic tables, outside furniture and playground equipment is the second phase of the playground. The groundwork was laid in July 2018 during Serve Day, a national movement that brings together churches to help in their local communities. Jackson said several area churches – Church of the Highlands, The Gathering Place Church, LakeHills Church and New Mt. Moriah Baptist Church – jumpstarted the project by installing swing sets. Central State Bank donated turf for the playground.

“It’s really been a work in progress,” Jackson said. “It’s been a community project, which has been helpful.”

Jackson said the school is a long way away from reaching its $5,000 goal. More community partners are needed to help the playground come to fruition. To find out more about how to help, contact the school at 205-682-6140.