Jerman is a lieutenant colonel and inspector general in the Civil Air Patrol and serves a flight instructor, check pilot, and fraud and abuse investigator. 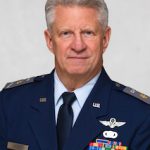 There are 1,000 Civil Air Patrol members in the state of Alabama.

The program conducts about 97 percent of the searches for down air craft.

He is the founder of the Chelsea Observer Patrol (COP), a Shelby County RSVP volunteer with the COP program, an air show pilot and a HAM radio operator.

His primary role with the COP volunteers is to observe and report suspicious activities and problem situations for investigation and action.

Jerman’s other duties include assisting with crowd control and traffic management at the Christmas Parade, Fourth of July and high school events.

At its annual recognition banquet, the Montgomery Police Department awarded Jerman for his guidance in establishing the MPD Volunteers in Action Service Program.

By SASHA JOHNS / Community Columnist Since 1968, babies born at St. Vincent’s hospital in December have had the privilege... read more