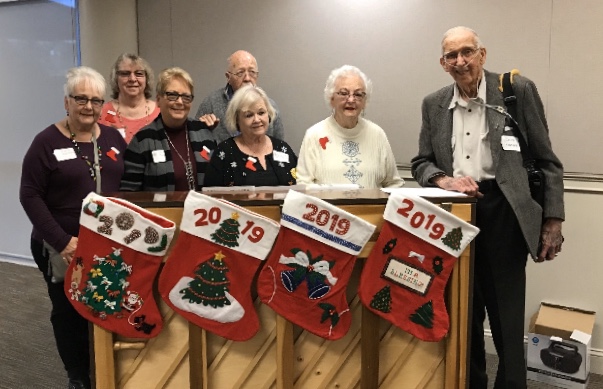 Susie Mauldin and Sharon McGuirk (front left) of Shelby with their crafting group and most recent stockings for newborns. (Contributed)

Since 1968, babies born at St. Vincent’s hospital in December have had the privilege of going home in a handmade felt stocking that is just their size, thanks to the late Hilda Baker.

It all started with Baker and has continued over the years with volunteers all over the Birmingham area. One of these volunteers, Joyce Wilburn, 87, has been making the stockings for more than 25 years.

After five years of joyfully making newborn stockings, she recruited her grown daughters, Susie Mauldin and Sharon McGuirk, who still to this day, along with their mother, work with a small group of about 10 volunteers at their mother’s church in Gardendale to create about 150 stockings for newborns a year.

It’s a year-long endeavor to provide so many stockings. They are already planning for next December, and because St. Vincent’s has recently expanded, the goal for next year has jumped to a whopping 500 stockings. As such, they are seeking help all over Shelby County and the surrounding areas.

Mauldin and McGuirk both live in Shelby, not far from Lay Lake. They are currently looking for community groups that might want to start groups of stocking sewers in order to help meet the goal for next year.

“Even if you can’t sew a button,” Mauldin said, “We’ll teach you everything you need to know.”

The Daughters of Charity, the name St. Vincent’s started under, provides all the materials for these family heirlooms, and Wilburn still sews the stockings themselves; however, it’s the decorating of the stockings for which the women are seeking help.

Each stocking has its own felt and beaded decorations that make every one of them unique. The ladies will happily teach you how to create something special for the newborns of the Birmingham area.
“You can cut out the felt pieces, or sew them on, or bead and embellish them,” Mauldin said. “We are constantly coming up with new ideas and ways to make them all different.”
Mauldin’s own group called ACTS (Arts & Crafts Talent Sharing) is mostly made up of senior citizens. Even some of the older men who are retired get in on the decorating. “Often some of these older folks just need something to help them stay vital and feel needed. This work is perfect for that,” she said.
She was quick to add that they aren’t only seeking older helpers. This activity would be great for all kinds of women’s groups, Girl Scout troops, Sunday School classes and other kinds of groups.

You can commit to any number of stockings and set up the making of them a one-time event for your group, or start a club that would help with it year-round.
The ACTS group meets every Thursday at Gardendale First Baptist at 9 a.m. If you are interested in starting your own group or creating an event to help the ACTS group, reach out to Susie Mauldin at (205) 545-6153. Each stocking created, whether by an individual or by group, greatly helps the effort.