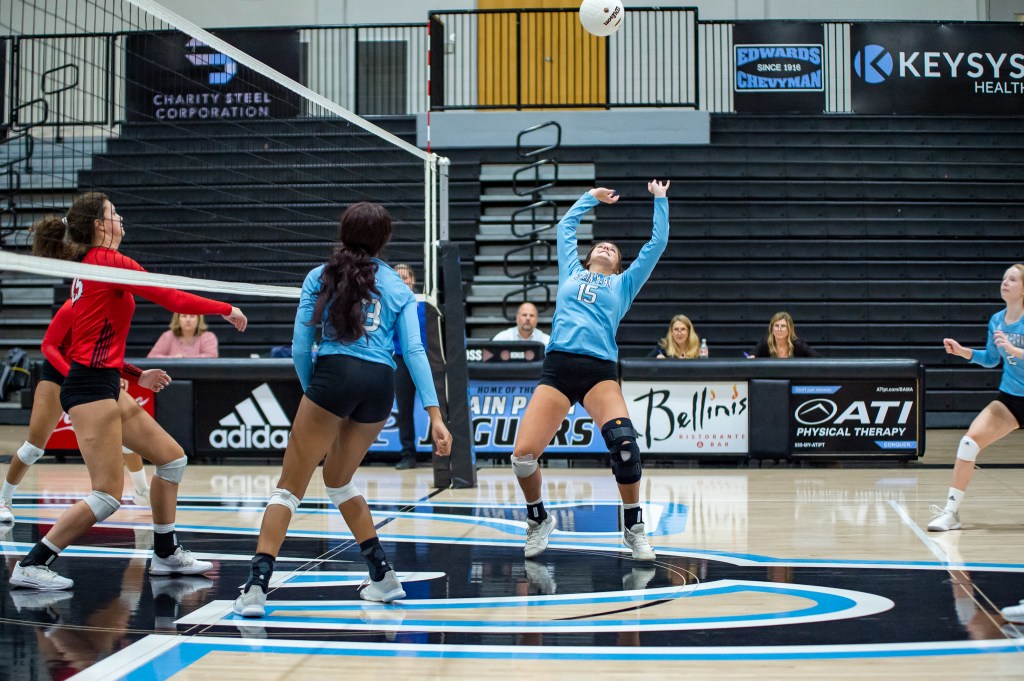 The Spain Park Jaguars will go through the next two volleyball seasons without having to compete against powerhouse Mountain Brook after the latest reclassification was released by the AHSAA. (File)

When it comes to volleyball and cross country, the county has been blessed with championships and strong showings over the last two years, but for the upcoming 2020 and 2021 volleyball seasons, there could be some adjustments needed after teams shifted classifications and areas in the latest AHSAA reclassification released on Tuesday, Dec. 17, for all fall sports.

The major changes announced in this year’s reclassification in volleyball and cross country were jumps from both Briarwood and Westminster at Oak Mountain. Below we break down every change ahead for the 2020 and 2021 seasons for both sports.

When it comes to volleyball, Spain Park, and really all of 7A is a winner, with Mountain Brook dropping from Class 7A to Class 6A.

That will benefit Spain Park specifically with the Spartans leaving their area, which opens the door for a new area champion. The Jags will compete in Class 7A, Area 6 over the next two seasons, which features Gadsden City, Hewitt-Trussville and Vestavia Hills.

For Oak Mountain and Thompson, volleyball will remain in Area 5 for the next two seasons, which features Hoover and Tuscaloosa County.

In cross country, the three teams will remain in Class 7A, Section 3. That section will lose Mountain Brook, but retains Hewitt-Trussville, Hoover, Tuscaloosa County and Vestavia Hills, while adding Gadsden City.

One of the biggest shifts comes in the 6A classification, not just with Briarwood moving in, but with Chelsea splitting from Pelham, Helena and Calera.

Chelsea moves from Area 8 to Area 9, and that’s also where Briarwood will be added. Aside from those two teams, they’ll have the pleasure of competing against Mountain Brook and Homewood, two extremely difficult teams. The Spartans have won four of the last six Class 7A state championships.

Calera, Pelham and Helena will remain in the same area together, but go from Area 8 to Area 6, where they’ll compete against Chilton County.

Calera and Helena will be in Section 3 with Brookwood, Hillcrest, Hueytown, Jasper, McAdory, Minor and Northridge.

The Shelby County Wildcats will move from Area 6 to Area 8 in Class 5A volleyball, which will feature four new opponents. The Wildcats will now take on Central-Clay, Sylacauga and Talladega.

Class 4A (Montevallo and Westminster School at Oak Mountain)

Montevallo will remain in Class 4A the next two years, but in volleyball, the Bulldogs will move from Area 8 to Area 5. There, they’ll face three new opponents in Bibb County, a former 5A team, as well as Dallas County and West Blocton.

The Westminster at Oak Mountain Knights will also move up a classification from 3A to 4A when it comes to cross country. The Knights will now compete in Class 4A, Section 1 against Alabama Christian Academy, Bayside, Bibb County, indian Springs, Jackson, LAMP, Montevallo, St. Michael Catholic, Straughn, Booker T. Washington and West Blocton.

Class 2A (Vincent and Westminster School at Oak Mountain)

After a trip to the state championship this past season, Westminster will also jump up a classification in volleyball due to competitive balance. The Knights are going to join Class 2A, Area 9, where they’ll compete against Altamont, Holy Family Catholic and Midfield.

For the Vincent Yellow Jackets, they’ll compete in Area 7 when it comes to volleyball. That area features Central-Coosa, B.B. Comer and Horseshoe Bend.