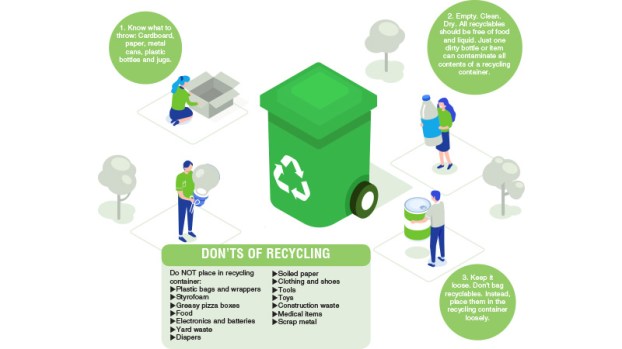 Future of recycling in doubt following ‘seismic change in the industry’

There was a time when recycling was big business. Companies like Birmingham Recycling & Recovery paid waste management companies and municipalities for each load of recyclables brought to the facilities.

But the market was almost wholly dependent on exporting the materials to China, which in 2018 effectively banned the import of foreign recyclables.

That move has left the future of local recycling opportunities in doubt, with at least two Shelby County municipalities having already ended curbside recycling services.

A letter notifying Birmingham Recycling customers of the rate changes note a “seismic change in the industry.”

“We are aware this is not an ideal situation,” reads the letter signed by General Manager Chris Bartlett. “However, Birmingham Recycling can no longer absorb these costs.”

By comparison, the Shelby County Landfill accepts refuse for $22 per ton.

The rate increase was the primary reason given by Alabaster Mayor Marty Handlon in a November letter informing residents of the city’s decision to end curbside recycling collection.

“Our concern is not over a company making profit, it is the astronomical jump in the cost to the city, without time for adjustments or enough notice to budget for the impact,” Handlon wrote, and added that other feasible recycling options would be sought.

Montevallo was the first local municipality to end its service, in August, with city officials blaming rising costs.

For now, other local municipalities, and Shelby County, continue to offer curbside recycling.

The most important reason behind the continued service is contracts these agencies have in place with waste management companies.

Chelsea, Helena, Hoover and Pelham all have contracts with companies including Republic Services and Santek that mandate those companies provide curbside recycling. With rates also dictated by terms of the contracts, residents will continue to receive the service, at least until the contracts expire.

Contracts are usually set for two or three years at a time. Once the current contracts expire, the waste management companies could either decline to continue offering curbside recycling pick-up, or require a rate increase to offset the cost increase on their end.

All Shelby County residents can drop recyclables in one of four bins located throughout the county: at the Ray Building in Columbiana, Harpersville City Hall, the Montevallo Recycle Center and Heardmont Park.

In addition to the large bins and residents in unincorporated Shelby County, the county also serves customers in Harpersville, Indian Springs Village, Vincent, Westover and Wilton—about 20,000 customers in all.

A problem with recycling across Shelby County is contamination. Only certain materials (cardboard, paper, metal cans and some plastics) are eligible for recycling—and the items must be empty, clean and dry.

Other material (plastic bags, soiled paper, Styrofoam, food, electronics, yard waste, scrap metal and more) should not be placed in recycling bins. If they are, an entire load of recyclables can be deemed contaminated.

Birmingham Recycling charges an additional $50 per ton for disposing of contaminated material, which is determined at their discretion.

For now, Shelby County residents are encouraged to educate themselves on how to recycle properly and avoid contamination. Doing so will help save local governments’ money.

The future of recycling in Shelby County is much less clear.

By GRAHAM BROOKS / Staff Writer PELHAM – After more than five months serving as the interim chief of police... read more