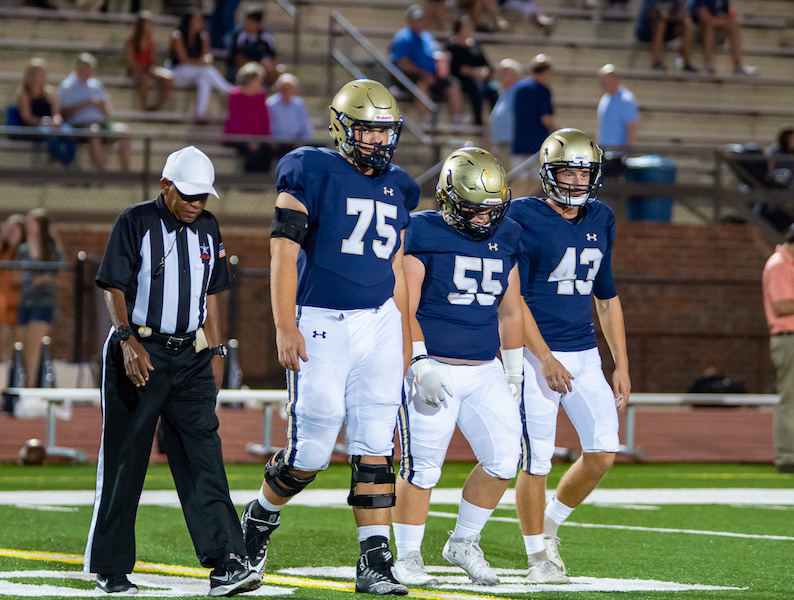 Briarwood offensive lineman Trent Howard (No. 75) signed with Clemson on Wednesday, Dec. 18, to continue playing football at the collegiate level. (For the Reporter/Larry Dancy)

Two of the county’s best offensive linemen, both recently named to the All-County First Team, have officially signed to continue playing the sport they love at the next level, and both to impressive universities.

Howard, who was committed to Georgia Tech for a long period of time, had a late change of heart in the last two weeks thanks to a late offer and officially signed to play collegiately at Clemson University.

Padgett also signed with a powerful school when he inked with Jacksonville State University to remain in the state of Alabama at one of the best Football Championship Subdivision (FCS) teams. 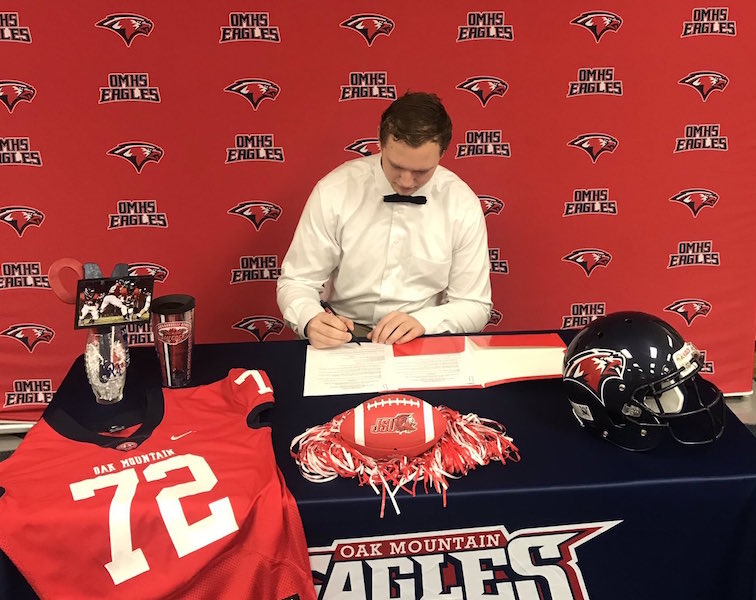 Howard will be joining a Clemson team that has won two of the last three championships and is set to play in the College Football Playoff (CFP) for the fifth consecutive year.

He was originally committed to Georgia Tech, a decision he made over the summer on June 17. But that didn’t stop Clemson head coach Dabo Swinney from making a late push for Howard after the senior season he put together.

Howard’s father, Johnny Howard, was a member of the 1992 National Championship team at the University of Alabama, a team that also featured Swinney, which already put Trent on his radar.

In addition to that, Swinney has several local ties to the Birmingham area and was able to convince former Briarwood player Carson Donnelly to come to Clemson last year.

That along with former Spain Park player Tyler Grisham being on his coaching staff and having given former Briarwood player and coach Joe Craddock his start in coaching, the ties run deep for Swinney and the Lions, which in turn put Howard on his radar.

Standing close to 6-foot-5, 290 pounds, Howard had previously talked with the Tigers before committing to the Yellow Jackets, but wasn’t offered.

That all changed on Dec. 5, when Howard got the offer he had always hoped for but didn’t think was coming.

While it was a difficult and stressful decision, he decommitted from Georgia Tech and committed to Clemson on Dec. 6.

Now, less than two weeks later, he has signed his letter of intent and will join the Tigers for the 2020 college football season.

Head coach Matthew Forester and former head coach Fred Yancey have both described him as the best offensive lineman in the school’s history.

At Oak Mountain, Padgett got similar praise from head coach Cris Bell over the last couple of years.

Standing at 6-foot-7, 280 pounds, he has as much upside to become a dominant lineman as anyone. He finished this season with eight pancake blocks, but more impressive, he gave up no sacks and blocked in a difficult option style attack that was strong on the ground.

Padgett had an offer from North Alabama in addition to his offer from Jacksonville State, but the Gamecocks offered him the opportunity he was looking for.

He took his time making the decision, not committing until Dec. 16, but once he came to that decision, it was “1,000 percent,” and a day later he signed his letter of intent to make it official.

Both guys have put in the work, and were extremely grateful for their opportunities, and now both have the chance to live out a dream at prominent programs.