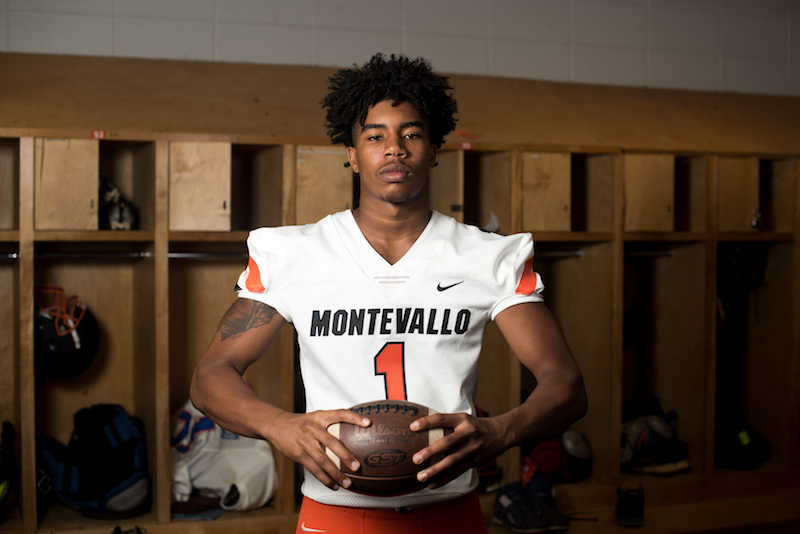 The high school career of J.J. Evans has come and gone in the blink of an eye, but it’s a journey that will forever be known for not just shaping Evans’ life, but making history and setting up his next chapter of life.

After setting school and state records the last two years at Montevallo High School, Evans officially signed with Auburn University to continue playing the sport of football on Wednesday, Dec. 18.

One of the most coveted receivers in the country and the state as a four-star recruit, Evans was sought after by top SEC programs, including Alabama and Georgia. But at the end of the day it was Auburn that landed the top talent from Montevallo.

Evans broke onto the scene as a star player for the Bulldogs during the 2018 season where he went on to finish the year with the second best receiving season in Alabama high school football history.

With 1,706 receiving yards during 2018, Evans finished just 29 yards behind Westbrook Christian’s Brandon Greer, who set the single-season record in 1998 with 1,735 yards.

Evans did so to the tune of 74 receptions, which is also one of the best marks in the state’s history, with 125 from former Montevallo and Thompson player Ahmad Edwards leading the way.

By making a name for himself early on during his junior season, the 6-foot-2, 190-pound receiver started getting a lot of attention from a national recruiting standpoint with offers rolling in from major Division I colleges, including Auburn, Alabama, Georgia, LSU and Clemson.

That tested Evans’ focus and commitment going into his senior season, but he never wavered. Working daily during the spring with teammates and throughout the summer, Evans was determined to come back better during his senior season, knowing teams would be focused on him.

And despite facing double teams, dealing with an injury that put him out a couple games and being forced to play quarterback for the injured starter Malik Inabinette, Evans still totaled 755 receiving yards and eight touchdowns on 43 receptions.

With that season, he truly did become a team player, not only doing what he need to help his teammates, but accepting his role to allow for other players like running back Deon Gilliland and receiver Jamarius Carter to both have special seasons offensively with 1,000-plus yards at their position.

Now, heading to Auburn, he will have to work harder than ever before in his life, but as a kid that almost gave up the sport for good after his dad passed away several years ago, Evans is determined to do whatever it takes to become his best on the football field.

Signing in front of his family and friends inside the Montevallo High School auditorium on Wednesday, he and his family were all smiles, as the surreal dream he had growing up had now become a reality.