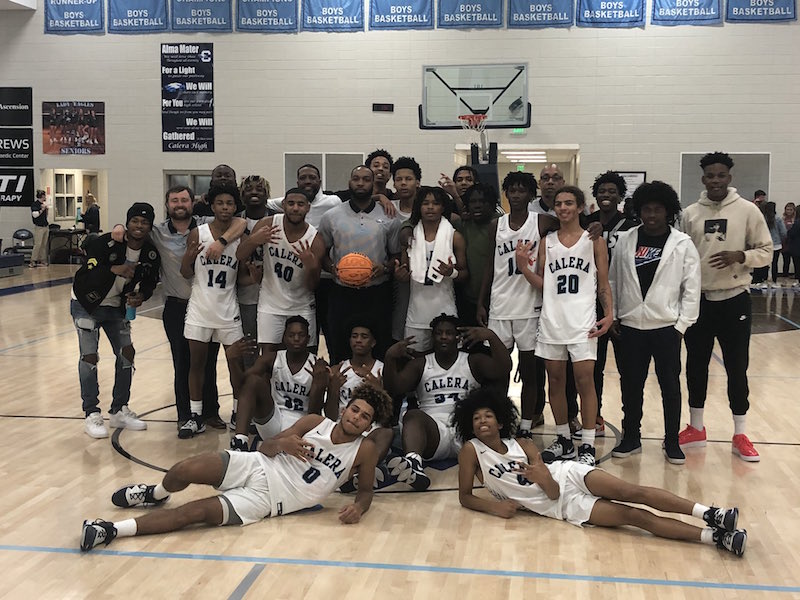 Calera basketball head coach George Drake picked up his 100th victory of the season on Thursday, Dec. 19, when the Eagles defeated Jackson-Olin. (Contributed)

CALERA – An emotional year that started with head coach George Drake not on the bench with his Calera players, but instead taking care of his family and newborn son Jaxon, who has dealt with Moebius Syndrome since his birth, leading to several surgeries and a trying time for Drake’s family.

But the support of a community and from family and friends has been helpful throughout, and led to his return to the bench recently. Just two weeks after making his return, the team hasn’t just been inspired to play for their head coach and Jaxon, but they’re also showcasing their talent.

After losing three of four games by 12 points or less following a 6-1 start, the Eagles have bounced back with wins in three of their last four, including a win over Class 5A No. 7 Briarwood to spark a new winning streak.

But the second game in that two-game winning streak is one that the community could rally around.

Taking on Jackson-Olin on Thursday, Dec. 19, Calera was able to take advantage of four consistent quarters to pick up a 67-51 victory. But more importantly, it marked the 100th career victory for Drake.

A season that started with heartache, and a battle that is still ongoing for he and his family, saw a moment of cheerfulness and a cause for celebration. In his last two games on the bench, Drake has led the Eagles to an upset of an undefeated team and picked up his 100th victory to help his team improve to 8-4 on the season. 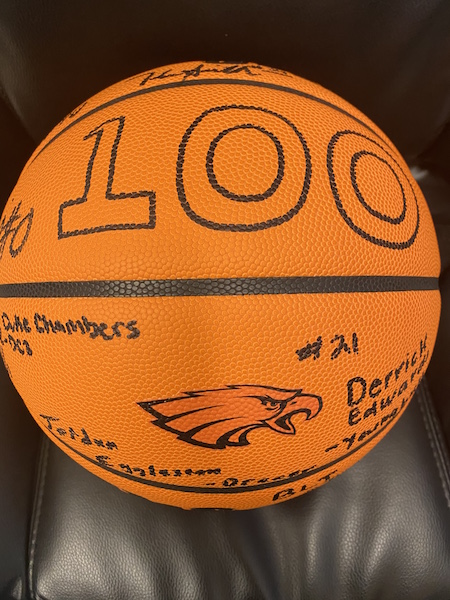 Against the Mustangs, Calera carried over its momentum from upsetting the Lions on the previous Friday night and used it as fuel early in the game, knowing what was on the line.

The Eagles came out and built an early 18-11 lead in the opening quarter behind two 3-pointers from Paris Whatley, four points from Isaiah Green and two points each from Duke Chambers Jamarius Ford and Xzayvion Childress.

That 18-point first quarter became the first of three consecutive 18-point quarters for the Eagles, who were able to put together a balanced effort throughout.

And the most impressive aspect of that consistency from the Eagles, is that several players stepped up.

In the second quarter, they got points from six different players, including two that didn’t score in the first half, showing Calera’s depth off the bench. Derrick Edwards came in and put together all six of his points in the second quarter with two field goals and a 2-2 mark from the free throw line.

That gave the Eagles 36 points at the half and a halftime lead, but it was just the beginning of a strong night.

In the third quarter, Green caught fire from the field, knocking down four field goals, including an and-1, for nine points. That, along with a 4-6 mark at the free throw line from Markell Kelley, helped Calera post another 18-point quarter to extend its lead to 54-41 going to the final quarter of play.

With that lead in the fourth period, Calera was forced to win the game at the free throw line. The Eagles capitalized on what has been a decent year from the line by hitting nine of their 13 attempts.

That combined with a strong defensive effort helped close out the game with a 13-10 quarter, which led to the final score of 67-51. For the game, Calera shot 21-27 from the free throw line, which was a difference in creating separation.

The Eagles (9-4) were led by 14 points from Green, while Whatley added 12 points. A total of 10 different players scored in the balanced attack, while six of those 12 had at least six points.

Calera will take on Montevallo at the University of Montevallo tonight at 7:30 p.m., in a game that is expected to have a large crowd in attendance.