When Susan Tedford is asked what drives her to volunteer, she says, “I get as much out of it as I put in it.” The London, England native migrated to the United States 58 years ago when she married her United States Air Force husband, Mack Tedford.

The couple had four daughters. Once they started school, Susan became a substitute school teacher in order to remain close to them during the day. 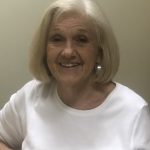 Susan’s call to interest in advocacy for seniors started decades ago as a result of her brief employment at the probate office, where she worked in the tag division with Judge Tommy Snowden for about two years. Snowden encouraged her to become director of the RSVP program in 1975, she said.

In 1978 she was offered the position of director of Shelby County Senior Services.

She spent 28 years as a professional advocating for seniors.

Susan said her interest in issues relating to seniors only heightened over the years. “I became one,” she said, smiling.

Susan has served on the Advisory Council of Middle Alabama Area Agency on Aging (M4A) for several years and chairs the meetings.

Her biggest and possibly most important volunteer role is as District 43 Representative with the Alabama Silver Haired Legislature (ASHL).

Susan was elected in 2006. ASHL is a unicameral nonprofit model legislature of citizen volunteers age 60 and older elected or appointed by their peers to represent the interests of older Alabamians.

ASHL strives to educate Alabamians about local and state issues of concern to the elderly by drafting resolutions, participating in committee work, debating and advocating legislation.

Needs of the aging population are identified and addressed in resolutions provided to the Alabama State Legislature and to the governor for appropriate action.

“I feel like we are really helping the seniors,” Susan said.