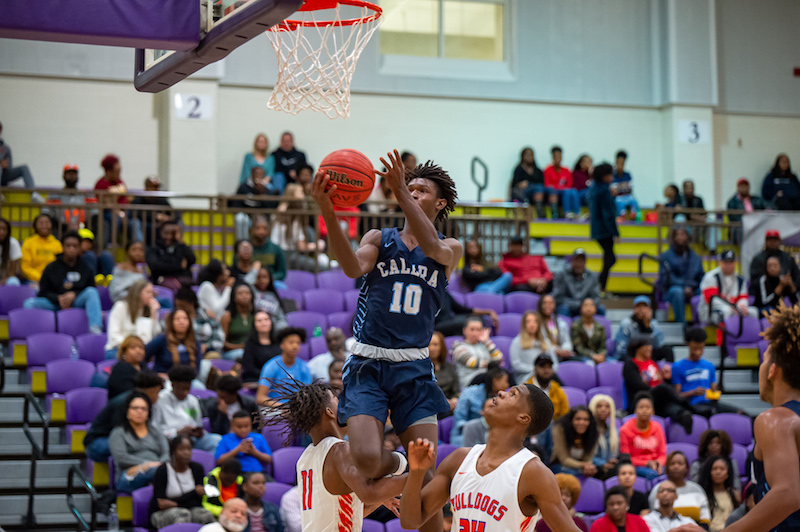 The Calera Eagles held off a fourth-quarter comeback attempt from Montevallo on Friday, Dec. 20, to pick up their 10th win of the season. (For the Reporter/Larry Dancy)

MONTEVALLO – In a game that was moved to the University of Montevallo because of the excitement surrounding it, Calera and Montevallo put on a show in a rivalry matchup on Friday, Dec. 20.

In what looked to be a blowout going into the final quarter with Calera leading 53-37, the Bulldogs put forth a 21-point final quarter that saw them get within five points of the lead. But Calera’s big lead became too much of a hole for Montevallo to dig out of, as the Eagles were able to hold off the comeback to pick up a 63-58 win.

With the victory, Calera won its third game in a row and improved to 10-4 overall on the season, while the Bulldogs fell to 7-6.

In the opening quarter, the Eagles got off to a strong start behind 10 combined points from Paris Whatley and Jordan Eggleston, who helped Calera post 17 points in the period.

Montevallo, however, got off to a slow start and posted its worst offensive quarter of the game with 10 points, which allowed the Eagles to take an early seven-point lead.

But roles reversed in the second quarter. Montevallo’s defense made adjustments and limited Calera to just four different scorers in the quarter and 12 total points.

Montevallo’s offense still wasn’t clicking, but thanks to eight points from Michael Jones, the Bulldogs put up 13 points to trim away at the deficit and make it a 29-23 halftime lead for the Eagles.

But coming out of the half, it was Calera that made major adjustments, and the balance that has made the Eagles so good all season, finally made an appearance.

Six different players scored for them in the third quarter, including four players with three or more points, which led to the best period of the game for either team with 24 points.

Montevallo’s offense still hadn’t found a consistent rhythm, as the Bulldogs had their best quarter of the game to that point, but still only put up 14 points, which allowed the Eagles to take a 17-point lead into the fourth.

That, however, is when the Bulldogs made their move. Jamarius Carter, who had been held in check due to foul trouble, was able to put together an eight-point final quarter, while four others scored points to help Montevallo score 21 points in the period.

But time wasn’t on the Bulldogs’ side. While it was a furious comeback attempt, Calera’s big lead heading to the final quarter was too much to overcome, as the Eagles held on for the five-point win.

Calera was led by 13 points from both Whatley and Eggleston in the victory. Behind that, Duke Chambers and Keshawn Haynes had eight apiece. In all, the Eagles had nine players score in the game, while seven of those nine scored at least five points.

Montevallo ended up with four scorers in double figures. JaBrian Sullens and Michael Jones led the way with 12 points, while Carter added 11 points and Xavier Campbell had 10.