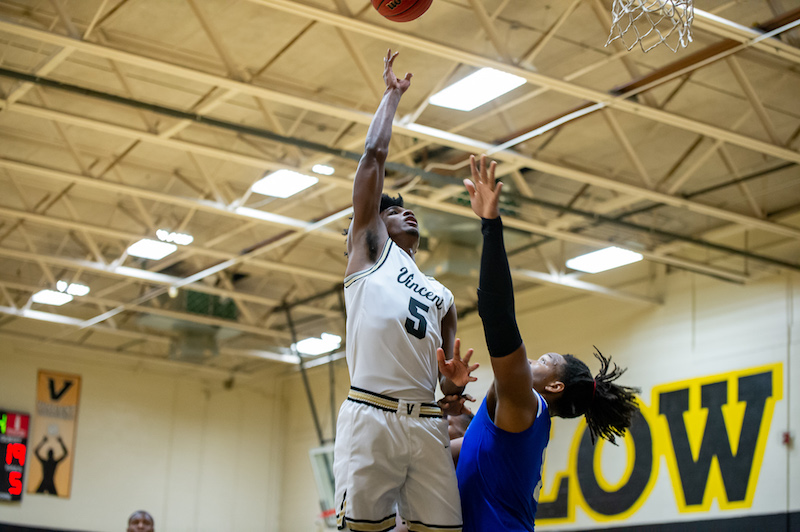 Vincent’s Malik Hamilton had a double-double performance against B.B. Comer on Thursday, Dec. 19. (For the Reporter/Larry Dancy)

SYLACAUGA – After scoring a season-high 93 points in a dominant win over Moody earlier in the week, the Vincent Yellow Jackets got right back to work on Thursday, Dec. 219, and picked up another big win.

With a strong first half that saw the Yellow Jackets build a 29-11 lead, they never looked back en route to a 58-40 win over B.B. Comer for their seventh win in a row and 10th of the season.

Vincent held the Tigers to five and six points in each of the first two quarters, respectively, and coasted to the finish line, as the No. 2 Jackets continued to roll midway through the season.

In the opening quarter of the game, the Yellow Jackets jumped out to a quick 8-0 lead. Comer pulled back within three points late in the quarter at 8-5, but Vincent then ended the period with a 3-pointer to take an early six-point advantage.

But the game had slowed in pace and neither team was doing a whole lot offensively.

The Jackets made two early free throws to go up 13-8 and after one more 3-pointer from each team made it 16-11, Vincent finally put together its best run of the game.

Up by five at that point, the Yellow Jackets closed the half on a 13-0 run, including a late shot just before the half that put them up 29-11 at the halftime break.

Vincent came out of the break and eventually extended the run to 17-0 for a 33-11 advantage, before the Tigers finally put it stop to it.

But at that point, it was too late. The two teams battled back-and-forth the rest of the third quarter, which led to a 13-13 period, but that did nothing to help the 18-point deficit Comer was facing coming into the quarter.

Now leading 42-24 heading to the final quarter, Vincent slacked off slightly early in the fourth, which allowed the Tigers to cut the deficit to 12 points with a quick 8-2 run, but that’s as close as the Jackets let them get.

Vincent had an answer for everything the rest of the way and went on to score 14 points in the final minutes to put away the 18-point win.