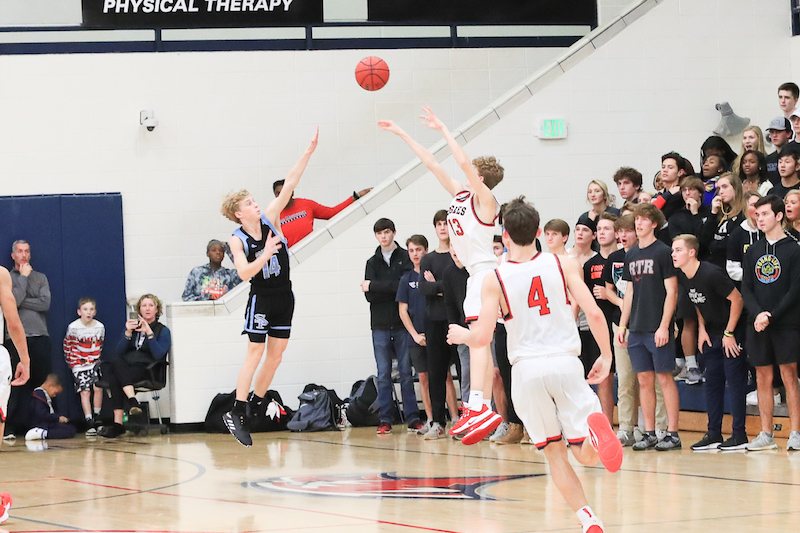 Oak Mountain's Brady Dunn shoots a deep 3-pointer of the Spain Park defender. He made six for 18 points to lead the Eagles to the championship win. (For the Reporter/Dawn Harrison)

NORTH SHELBY – A week removed from playing each other for the first time this season, the Oak Mountain Eagles and Spain Park Jaguars met once again on Saturday, Dec. 21. But this time, the championship of the 2019 Oak Mountain Invite was on the line.

A week earlier, the Jaguars had come into the Eagles’ gym and pulled off a comeback in the final 30 seconds to pick up a 52-48 win. That was part of a four game winning streak for the Jaguars, who went on to beat two good teams in McAdory (71-52) and Homewood (55-51) in the first two rounds of the Oak Mountain tournament.

The Eagles, however, entered the tournament in an opposite situation. Oak Mountain had lost four of five games, including three in a row heading into their own tournament.

But the positive the Eagles were able to take away from that difficult stretch was the fight they showed in every game. Every loss in that five game stretch had come by eight points or less, while three of the losses were by four points or less.

They knew they were competing with good teams, which helped their confidence not waver despite the rough stretch.

That, combined with redemption on their mind, helped the Eagles regain their strength in the tournament.

Oak Mountain started its own tournament with a 71-38 victory over Leeds, before then beating Mortimer Jordan 57-51 to earn a rematch with the Jaguars in the title game.

And from the opening tip, you could sense an edge from Oak Mountain. Not wanting to lose to their rival on their home floor again, the Eagles got out to a fast start with 16 points on the offensive end of the floor, while the defense limited the Jags to just 11 in the opening quarter.

That was just part of a strong defensive first half for Oak Mountain, who went on to limit the Jags to just 12 points in the second quarter and 23 points for the half.

The Eagles, however, scored 15 in the second quarter, giving them a confidence-boosting first two quarters of the game and a 31-23 lead at the half.

Coming out of the break, however, Spain Park had made necessary adjustments to find an offensive rhythm.

The Jags went on to score 20 points in the period, which was just one less point than they had in the entire first half of the game.

But, with that more up-tempo offensive game plan, the Eagles took advantage and added their best offensive quarter of the game as well. Already in somewhat of a rhythm in the first half, Oak Mountain scored 20 points itself to match the Jags and hold its eight-point advantage heading to the final quarter of play.

After giving up a lead in the final quarter a week earlier to Spain Park, the Eagles were determined not to do that again. With the lead, they knew just playing strong defense would make the difference, and that’s exactly what they did.

Oak Mountain played its best defensive quarter of the game in the final quarter, limiting Spain Park to just nine points one quarter after the Jags had gone off for 20 points.

With that strong effort, the offense was able to seal the game and the tournament championship with a 16-point final quarter to close out a 67-52 victory.

Brady Dunn bookended an impressive tournament by knocking down six 3-pointers for 18 points to lead Oak Mountain (9-6) in the win, while Will Shaver added a double-double performance with 17 points and 10 rebounds.

Zane Nelson ended up winning the tournament MVP, while Shaver and Dunn were named to the All-Tournament team.

Spain Park was led by J.R. Lambert in the championship game with 10 points, while Cam Crawford and several others had a strong tournament for a team that is now 10-6 overall.