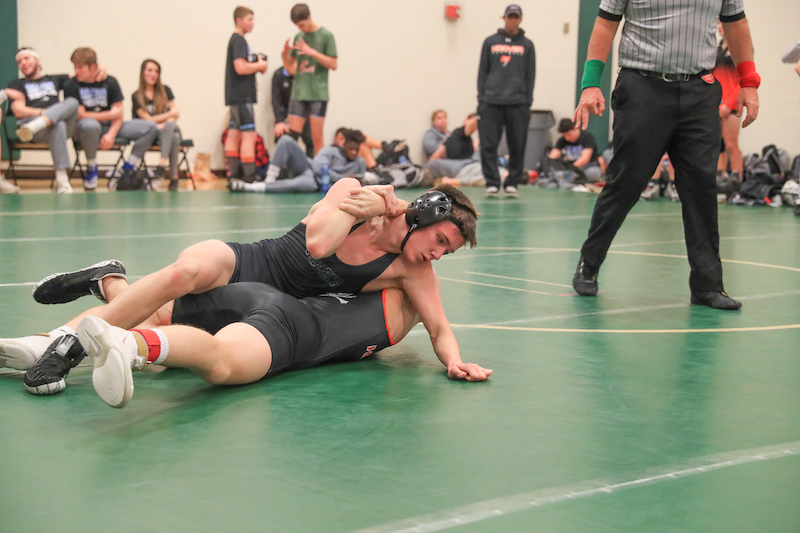 Helena put together a third-place showing at the Pelham Invitational wrestling tournament Dec. 20-21. (For the Reporter/Dawn Harrison)

Including the host Panthers, Oak Mountain and Helena both brought their wrestling teams to the tournament as well, and each of the three schools had highlights, including a third-place finish from the Huskies.

Helena’s impressive showing in the tournament included 10 wrestlers finishing in the top five of their respective weight class, as well as three first-place finishers.

Michael Moran, Nathan Dunaway and Davis Cummings each put together strong performances to claim the top spot in their weight classes.

Moran, wrestling in the 126-pound classification, won all of his matches via tech fall or pin, including a pin in the first-place match over Mountain Brook’s Coleman Bates.

In the 170-pound weight class, Cummings added 58 team points for the Huskies thanks to seven consecutive pins as part of a dominant day for him.

Dunaway also had a solid showing in the 220-pound division. After receiving a bye in the opening round, Dunaway put together six consecutive pins to take home first in the weight class.

Beyond that, Levi McGrew, Seth McGrew, Joseph Bratina, Miguel McGrew, Jacob Barrett, Chris Miller and Turner Morrison all finished inside the top five of their classification. Seth McGrew was a highlight in that pack, having advanced to the first-place match, before falling in a major decision to McAdory’s Hudson Waldrop.

The host Panthers also were able to claim five top-five spots during the tournament. But nobody was more impressive than Bryce Wanagat.

Wrestling in the 132-pound division, Wanagat put together six pins throughout the event to pull off first place with a dominant showing.

Teammate Noah Schilleci also had a strong day, eventually winning the third-place match with a decision over Homewood’s Joe Galvan to claim third in the 126-pound weight class.

Seth Branham, Alexander Terry and Jake Ingram each finished fourth in their respective weight classes for the Panthers.

Branham’s day included wins via two decisions, one pin and one major decision, and two losses by decisions. Ingram used three pins and a decision in his wins, while he lost by way of one decision and one pin.

Wrestling in the 182-pound classification, Terry got two byes in the first two rounds, then picked up a pin and a forfeit win. He lost a tight 3-2 decision in the semifinals and won via pin in the consolation semifinals, before closing his day by getting pinned in the third-place match.

For the Oak Mountain Eagles, Ryley Do-Bui and Luke Oswalt were the highlights with fourth and fifth place finishes, respectively.

Do-Bui won his first match of the day with a decision and advanced to round three with a bye before losing via fall. He went on to win two more matches with pins, while also losing two more, one by getting pinned and the other in a 9-7 decision.