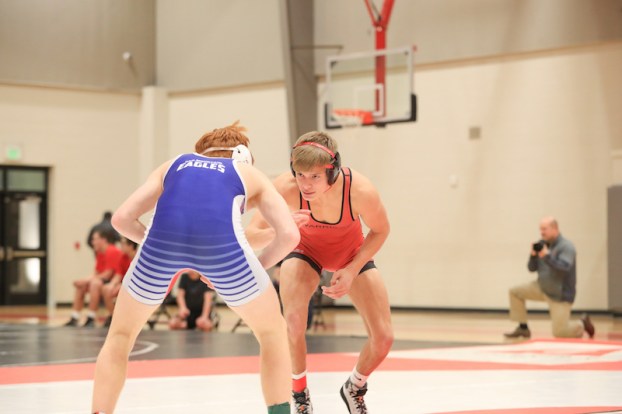 The Thompson Warriors put together a strong showing at the 2019 St. Nick Invitational, hosted by Richmond Hill (Ga.) High School, to claim second. (For the Reporter/Dawn Harrison)

RICHMOND HILL, Ga. – With a team score of 240 points, the Thompson Warriors’ wrestling team put together a strong effort en route to a second-place finish in the St. Nick Holiday Invitational held in Richmond Hill, Georgia Friday and Saturday, Dec. 20-21.

Wrestling in a tournament with several of the best schools from around the Southeast, the Warriors finished just slightly behind host Richmond Hill with a total of 337, and beat out five other talented schools.

Thompson was highlighted by four first-place finishers, but almost as impressive were the four others that finished in second to give the Warriors eight top-two finishers in the event.

Outside of those eight, three wrestlers finished in third and seven finished in fifth to give Thompson 18 total finishers inside the top five of their respective weight class.

After receiving a bye in the opening round, Vines put together two consecutive pins to kick off his tournament, before then receiving another bye. Following that second bye, he picked up a pin in the semifinal and won the first-place match with a tech fall to close out a perfect tournament.

Latona continued his strong season by starting the tournament with four consecutive pins to earn a spot in the semifinals of the 132-pound weight division. He then picked up a tech fall and an 18-4 major-decision victory to close out the win.

Wrestling in the 152-pound classification, Miller saw similar success. He won his first three matches with pins. Then, following a bye, he was able to grab a tech fall win in the semifinals and a 9-1 major decision in the first-place match.

Ward, wrestling in the 220-pound weight class, didn’t have as many rounds to worry about, but he dominated nonetheless. He picked up a pin against every opponent he faced to pull off a clean sweep and claim first in the division.

The second-place finishers included Cory Jones, Judah Campbell, Ashunti Perry and Michael Jackson, all of whom wrestled in a first-place match but came up just short.

One of the tougher losses came in the 160-pound weight class for Perry. After picking up four consecutive pins in the first four rounds, Perry lost a difficult 9-3 decision in the championship match to finish second in the division.

Jones also had a strong start to his tournament. After a bye in the first round, he picked up two pins in a row and a 10-6 decision victory to earn a spot in the first-place match of the 120-pound weight class. He went on to drop that match via pin.

Campbell had a similar day in the 138-pound classification. He received a bye in the opening round and then reeled off a 10-5 decision, a pin and a 14-5 major decision to earn a spot in the final match where he was also pinned.

In the 195-pound weight class, Jackson got three byes and a pin in the first four rounds to earn a spot in the semifinals. In the semifinals, he picked up his second pin, but was then pinned himself to close out the tournament.

By ALEC ETHEREDGE | Sports Editor  Featuring the best offensive and defensive players from each classification and separated into two... read more