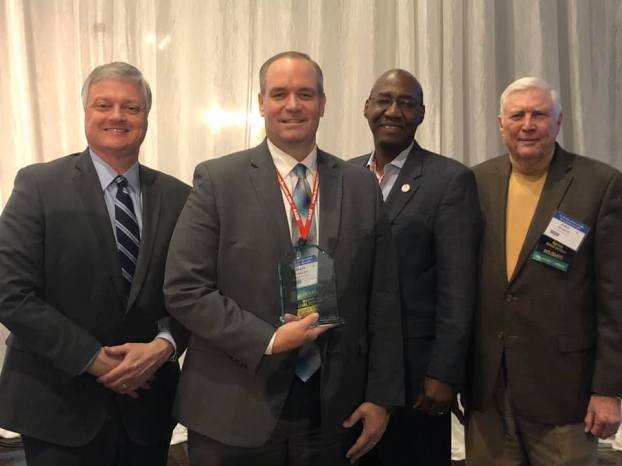 Cutline: Alabaster Board of Education President Adam Moseley, second from left, received the 2019 All-State School Board Member Award at a luncheon on Dec. 6. He is pictured with ACS Superintendent Dr. Wayne Vickers, board vice president Derek Henderson and board member Dr. John Myrick. (Contributed)

MONTGOMERY – Alabaster Board of Education President Adam Moseley was among the board of education members from central Alabama who were honored and recognized at the Alabama Association of School Boards’ annual awards luncheon held Dec. 6 at the Hyatt-Regency Birmingham – The Wynfrey Hotel.

The luncheon was held as part of AASB’s Annual Convention, which drew more than 500 school board members from across the state to Birmingham Dec. 5-7.

Moseley and former Trussville City Board of Education member, Bill Roberts, were honored as recipients of the 2019 All-State School Board Member Award, AASB’s highest recognition for past or present school board members who have demonstrated exemplary leadership.

“AASB commends these school board leaders for their exemplary boardmanship and for demonstrating the highest ideals of school board service,” said AASB President Gwen Harris-Brooks of the Lanett City Board of Education. “Adam, Bill and all of our other central Alabama honorees have proven they understand the importance of honing their educational leadership skills, and this recognition is well deserved.”

Moseley, a former Alabaster city councilman, has been a member of the Alabaster City School Board of Education since 2012. As an active participant in the AASB Academy, he has earned more than 241 training hours to reach the Academy’s Master level.

Moseley has a “great emphasis on quality, inspecting what we expect and setting high expectations,” said Alabaster City Schools Superintendent Dr. Wayne Vickers. “He is an outstanding board member because he believes in building champions.”

As a founding board member of Alabaster City Schools, which opened in 2013, Moseley also is credited for his vision in the early stages of creating the new school system.

Roberts served as a Trussville school board member from 2007-2019. During his 12-year tenure on the board, he earned more than 100 training hours to reach the Level 3 in the AASB Academy.

Trussville City Schools Superintendent Dr. Pattie Neill described Roberts as a great school board member whose positive influence and generosity were felt throughout the school system.

“He is a giver, and his volunteerism is his number one piece of notoriety,” Neill said. She added that Roberts was influential in the passage of a tax referendum that allowed the school system to increase its capital plan and build new schools.

Shelby County’s own Sheriff John Samaniego is the winner of Crime Stoppers of Metro Alabama’s 2019 Crime Stopper of the... read more